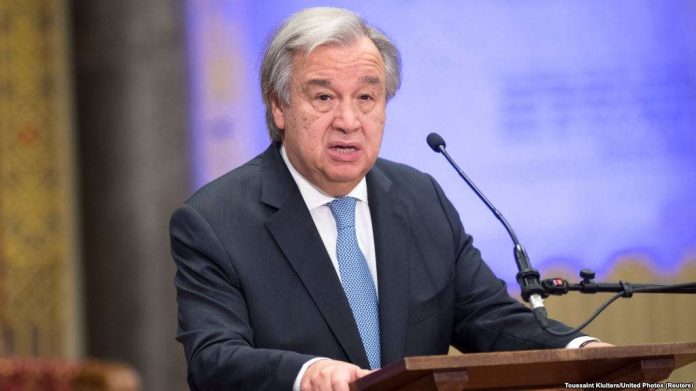 UN Secretary-General Antonio Guterres has commended Nigeria’s anti-corruption agenda, saying the country plays a leading role in the fight against corruption in Africa.

Guterres, who stated this in his remarks at High-level Debate Marking the 15th Anniversary of Adoption of UN Convention Against Corruption in New York.

The secretary-general pointed out that through Nigeria’s anti-money laundering efforts, stolen funds had been returned.

Guterres said: “African countries have taken a leading role in moving this agenda forward in the last AU Summit.

“And with measures as for example through anti-money laundering efforts in Nigeria and Tunisia, which have seen funds returned”.

He said if governments were serious about doing the best for their citizens, then pledges to promote integrity and clamp down on corruption must be more than campaign promises and words on paper.

“Millions will go to the polls this year with corruption high on their agenda. I make an urgent call to our global leadership to take a moral stand and install a culture of integrity from the top down.

“It all begins with setting an example. By tackling corruption, governments can show they mean business. We must all do more”.

According to him, those who can least afford corruption suffer the most adding, corruption cripples economic development, stifles entrepreneurship and deters investment.

Continuing, Guterres said: “Society cannot function equitably and efficiently when public officials – from doctors to police, judges and politicians – enrich themselves rather than perform their duties with integrity.

“Human trafficking and migrant smuggling, illicit financial flows and illegal trade in natural resources, weapons, drugs and cultural heritage are all made possible because of corruption.

“It fuels conflict, and when a hard-won peace is achieved, corruption undermines recovery.

“Corruption and impunity are corrosive, breeding frustration and fostering further corruption when people see no other way of achieving their goals”.

The UN chief added that the lack of opportunities for young women and men often exacerbated in corrupt societies, could feed into the cynical narratives of terrorists and violent extremists.

“The answer is to root out and eradicate corruption at all levels and restore trust where it has been lost,” the secretary-general stressed.

He said UN would continue to support Member States every step of the way, from helping to engage and empower citizens in this fight, to helping build and enhance institutions that could deliver on their promise

The UN chief urged Member States to use the 15th anniversary Convention as a platform to mobilise political and popular support for the fight against corruption.

He said the fight against corruption is the world’s most agile instrument in the hands of the international community to achieve our common goals of good governance, stability and prosperity.

Speaking alongside Guterres, Miroslav Lajčák, the President of the UN General Assembly also reiterated that corruption hurt all sections of the society adding, it “destroys everything in its path”.

Ultimately, corruption causes suffering to ordinary people going about their daily lives, he stressed, citing common examples: “When they are stopped at checkpoints, for bribes.

“When a bus does not come – or a clinic does not open – because budgets were mismanaged. Or when they lose all of their savings, from extortion,” said Lajčák.

Yury Fedotov, the Executive-Director of the UN Office on Drugs and Crime, also noted that while Sustainable Development Goal 16 explicitly urged action against corruption, tackling the problem was a prerequisite for overall economic growth.