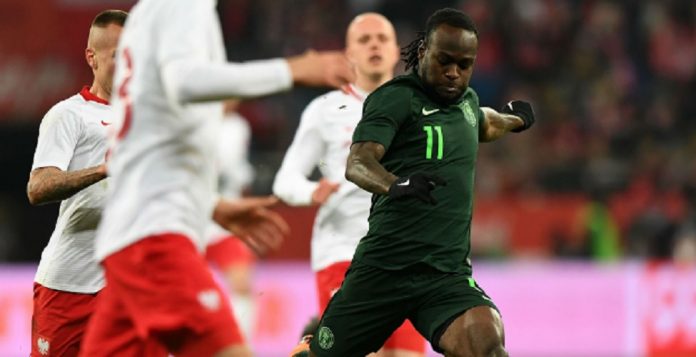 Victor Moses’ second half penalty after he was fouled was enough to secure the win for the Super Eagles.

It was a game the Super Eagles failed to create clear scoring opportunities and mostly played on the back foot before their goal.

Robert Lewandoski had the game’s first big chance on eight minutes after sliding to meet a dangerous low cross and his effort came off the post with Uzoho well beaten.

The game was briefly stopped on 10 minutes following injury to Karol Linetty over a collision.

Poland were forced into an early substitution as Linetty could not continue and had to be replaced.

The Super Eagles won a free-kick in a good area on 34 minutes but Moses’ effort went over the wall but did not trouble Lukasz Fabianski in the Poland goal.

In the 40th minute, Odion Ighalo connected with Moses’ free-kick which went just wide off target.

A minute later Uzoho was called into action as he dived full length to parry Lewandowski’s long range goal bound free-kick away for a corner.

Poland should have opened the scoring in the 56th minute following brilliant interchange of passes but Uzoho, growing in confidence, stopped Lewandowski from close range.

The Super Eagles made their first change with Ahmed Musa replacing Iwobi in the second half.

The Super Eagles took the lead in the 61st minute through Moses who converted from the penalty spot after he was fouled inside the box.

In the 66th minute, Poland almost equalised from a free-kick which narrowly went over the bar.

Poland went close again on 76 minutes but William Troost-Ekong made a superb block to deny the goal-bound strike.

The Eagles had a chance to double their lead on 83 minutes after good play from Moses inside the box only to see his cross blocked away for a corner.

And in the 92nd minute, Uzoho made a comfortable save from a corner kick.

Up next for the Super Eagles is another friendly match in London against Serbia in London.