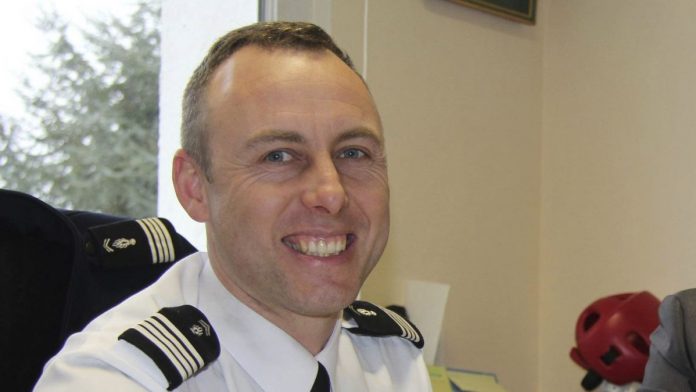 A police officer who swapped places with a female hostage during a supermarket attack in France has died.

“Lt. Col. Arnaud Beltrame died serving the nation to which he had already given so much to,” French President Emmanuel Macron said. He hailed him as a hero.

The gunman shot Beltrame when he responded to Friday’s supermarket attack in the southern French city of Trèbes.

“France will never forget his heroism, his bravery, his sacrifice,” Collomb tweeted.

Offered himself for a hostage

Beltrame offered to exchange himself for one of the female hostages held inside the Super U supermarket during the attack, and was shot while entering the supermarket.

When he went inside the supermarket, he left his phone on so police could hear his interactions with the gunman, Collomb said.

As soon as they heard gunfire, police went in and killed the gunman.

“I bow to the courage, the sense of sacrifice and the exemplary nature of this officer who gave his life for the freedom of the hostages,” the French National Police tweeted.

Married with no children, Beltrame had had a stellar career in the French military police and had already received a number of awards for bravery.

He served in Iraq in 2005, and was given an award for bravery in 2007, Macron said. For four years he was a commander in the Republican Guard, which provides security at the Elysee Palace, home of the President.

In 2012 he was knighted in France’s prestigious Legion of Honor. In his illustrious career, Beltrame had also served as secretary general in the Ecology Ministry for four years.

Beltrame was appointed deputy-commander of the anti-terror police in the Aude region last year.

According to the French newspaper La Depeche du Midi, last December Beltrame led a simulated terror attack on a supermarket for training purposes, very similar to the one on Friday where he lost his life.

“His leadership skills, his willingness, his unfailing commitment were appreciated by everyone, especially in the development of counter-terrorism capacity in the Aude police force,” Macron said.

“Lieutenant Colonel Arnaud Beltrame died in the service of the nation to which he had already contributed so much. By giving his life to end the murderous escapade of a jihadist terrorist, he died a hero.”

The gunman, Redouane Lakdim, 26, was known to authorities for minor crimes such as drug offenses, Collomb said.

Police detained a woman who was “very close” to Lakdim and “shared his life,” prosecutor François Molins said.

“Our country has suffered an Islamist terrorist attack,” President Emmanuel Macron told reporters. “We’ve paid the price of the danger of the terrorist threat in blood for several years.”

Macron hailed law enforcement’s response, and singled out Beltrame for his bravery.

“He has saved lives, and done his role and his country proud,” he said.

The ISIS-affiliated Amaq News Agency said that the gunman was a “soldier” of the militant group, but offered no evidence ISIS had any contact with the attacker.

“This attack has been claimed by ISIS, and it is currently being analyzed,” Macron said.

France has faced a string of terrorist attacks in recent years, including the Paris attacks and other smaller-scale assaults. The country remained under a state of emergency for about two years after the Paris attacks. It was lifted late last year.

Before raiding the supermarket, the gunman stole a car, killing one person in the vehicle and wounding another, the interior minister said.

The gunman then shot at four National Police officers who were jogging in Carcassonne. The driver tried to run the officers down. One of them was wounded, but he is not in serious condition.

The gunman proceeded to the Super U market, where he shot two people dead and took several others hostage.

Police found the car, and SWAT teams surrounded the market.

Collomb said a National Police lieutenant colonel shot the gunman after offering himself for at least one of the hostages.

The order of the shots was unclear, Collomb said. Police raided the store after hearing gunshots.

“People were absolutely calm before and never thought that there could be an attack in a town like this,” Collomb told reporters, adding that the risk of terrorism in France remained “very high.”

Macron said the investigation will answer several questions — when and how the gunman was radicalized, and where he got a weapon.