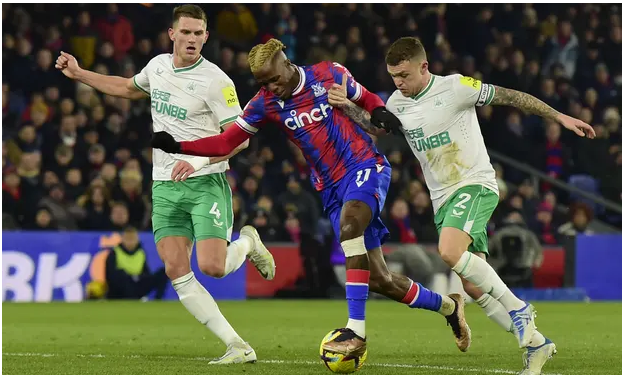 It has been so long since Newcastle last conceded a goal in the Premier League that even Eddie Howe might not remember who scored it. Yet another clean sheet – their sixth in succession – ensured that his side moved above Manchester United into third spot in the table despite failing to find a breakthrough against a stubborn Crystal Palace defence.

For the record, Romain Perraud’s consolation for Southampton back on 6 November was the previous occasion that Nick Pope had to pick the ball out of his own net in a league match and, apart from the brilliant second half save by the England goalkeeper to deny substitute Jean-Philippe Mateta, that record never looked like ending here.

Having now played 20 matches and conceded only 11 so far, the challenge is whether Newcastle can find the cutting edge required at the other end having failed to create many meaningful chances to take all three points here.

With the rest of the top four not in action until today, Howe must have realised this trip to south London represented an opportunity for his side to extend the gap over Tottenham in fifth place. The news that Bruno Guimarães had been surprisingly passed fit after initially being ruled out with an ankle injury this week was a major boost for the visitors as their manager was able to name an unchanged side from the victory over Fulham last weekend.

But there was a surprise selection from Vieira, who left Michael Olise on the bench despite his last-minute heroics against Manchester United in midweek and recalled Joel Ward, Eberechi Eze, Jeffrey Schlupp and Jordan Ayew, with the Palace manager citing the need for fresh legs. The draw against United that ended their nine-match winning streak was only the second point Palace had picked up against a top-six side this season after the stalemate at St James’ Park in September and it was Newcastle who started with more intent when Miguel Almirón just failed to guide a cross from Joe Willock on target.

A clever move down the right flank involving Kieran Trippier and Dan Burn that ended with Vicente Guaita making a comfortable save was another warning for Palace that it could be a long evening for the home supporters. But while Eze began to find his feet in midfield, creating real chances against a defence as miserly as Newcastle’s is no mean feat. Sven Botman has yet to finish on the losing side in 17 previous Premier League appearances and the Dutchman rarely had to break into a sweat as Palace were restricted to just a single touch in the Newcastle penalty area in the opening 25 minutes.

Palace captain Marc Guéhi was perhaps lucky not to be shown a second yellow card for bringing down Callum Wilson having been harshly cautioned early on by referee, Craig Pawson, for a mistimed challenge but the resulting free-kick was wasted. It was another set-piece that almost proved to be Palace’s undoing, however, when Joelinton found himself unmarked on the edge of the six-yard box following a corner but could not find a way past Guaita on the goal-line. Wilfried Zaha went down under pressure from Kieran Trippier in a rare attack at the other end and Chris Richards headed wide from a corner in Palace’s first effort of any significance just before the break.

Having managed just 18 goals all season in the Premier League, it is clear to see where Vieira’s problems lie and it remains to be seen whether Palace continue their January tradition of signing a striker that began in 2018. Zaha required treatment for a suspected hamstring injury at the start of the second half but returned to the fray with his leg heavily strapped. Newcastle continued to mount the pressure as Botman headed wide from Trippier’s corner on the hour mark but Zaha’s race was run soon after as he hobbled off to be replaced by Olise.

The moment Palace supporters had been waiting for came soon afterwards when Odsonne Édouard set up Mateta inside the area but the French striker’s powerful effort was somehow diverted over by Pope. Another substitute – Alexander Isak – also had a decent chance to win it late on but could only head Trippier’s cross straight at Guaita on an evening when both goalkeepers had the casting vote.