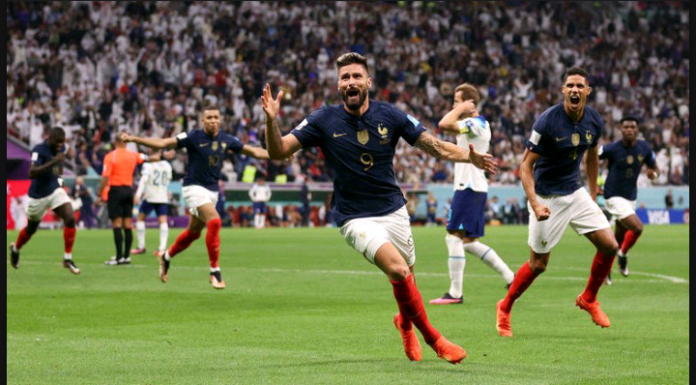 (AFP) – Olivier Giroud scored the winner while Harry Kane missed a late chance to equalise with a penalty as holders France beat England 2-1 in a tense World Cup quarter-final on Saturday.

Aurelien Tchouameni had swept France into a first-half lead only for Kane to level from the spot nine minutes into the second half.

England was the better side for long stretches of the game at Al Bayt Stadium but, almost from nowhere, France went back in front when Giroud headed home with 12 minutes left.

But Kane then blazed his second penalty of the game over the bar as England’s wait to win a first major international trophy since 1966 goes on.

France remains on course to become the first side since Brazil 60 years ago to successfully defend the World Cup.

With Brazil having been eliminated on Friday and England dealt with here in the desert north of Doha, France is now surely the favourites to retain their crown as they prepare to face Morocco in the semi-finals.

“It’s fabulous because it was a massive game against a really good England team but it is magnificent to be into the last four once more,” France coach Didier Deschamps said.

“We sort of gave them the ammunition with the two penalties, but we showed heart and guts to hold onto the result.”

This, remarkably, was the first meeting of these two great rivals in a major tournament knockout game, with Croatia’s victory in extra time preventing England from joining France in the final four years ago.

England followed that by losing the Euro 2020 final on penalties to Italy, and now they go out of another tournament because of a squandered spot-kick.

“I just said to the players I don’t think they could have given any more,” England boss Gareth Southgate said.

“They’ve played really well against a top team. It’s fine margins and things at both ends that have decided the game.”

There is no shortage of goal threats in the French side but few could have predicted that the opener would come from Tchouameni, the 22-year-old midfielder who had scored only once for his country before this game.

There was a touch of controversy to the goal, as it came from a France break which started with what looked like a foul by Dayot Upamecano on Bukayo Saka.

Brazilian referee Wilton Sampaio waved play on, and Kylian Mbappe cut inside from the left before Ousmane Dembele and Antoine Griezmann combined to set up Tchouameni to hit a superb shot from 25 metres that curled away from goalkeeper Jordan Pickford and into the corner.

France had looked the more dangerous team before that, but England grew into the contest after falling behind.