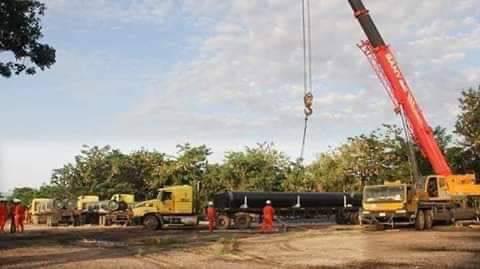 Work has commenced on the 614 kilometres Ajaokuta – Kaduna – Kano (AKK) gas pipeline project. The £2.2bn ($2.8bn) pipeline project represents phase one of the 1,300km-long Trans-Nigerian Gas Pipeline (TNGP) project, which is being developed as part of Nigeria’s Gas Master

Plan to utilise the country’s surplus gas resources for power generation as well as for consumption by domestic customers.

The 614km-long pipeline will originate at the Ajaokuta terminal gas station (TGS) in Kogi state and pass through Niger, the Federal Capital Territory (FCT), and Kaduna to terminate at a gas station at Kano. The pipeline will cross seven major rivers and ten major roads along its route.

The AKK pipeline project is divided into four segments. The first segment will run from Ajaokuta to Abuja in the FCT for a total distance of approximately 200km.

The second segment will extend for 193km from the Abuja TGS to the Kaduna TGS, while the third segment will stretch for 97km from Kaduna to Zaria and the fourth and final section of the pipeline will run for approximately 124km from Zaria to the Kano TGS.

The pipeline will comprise 40in-diametre pipe joints and operate at a pressure of 1,000 pounds per square inch (PSIG).

The Ajaokuta–Kaduna–Kano (AKK) pipeline will transport up to 3,500 million cubic feet (mcf) of gas a day from various gas gathering projects in southern Nigeria. Hydrocarbon liquids will be processed at Ajaokuta to produce liquefied petroleum gas (LPG), while the remaining gas will be transported to supply feedstock for new power plants
in Abuja (1,350Mw), Kaduna (900Mw) and Kano ( 2,350Mw) which is expected to increase our power generation by about 4000Mgw.

The project when completed will not only boost power generation in Nigeria which in turn will accelerate economic growth & quality of life of Nigerians but will also create thousands of jobs. It will equally eliminate gas flaring in Nigeria & save gas projects host communities from costly health challenges & environmental degradation associated with gas flaring. When finally joined with the proposed 4,401km-long Trans-Saharan Gas Pipeline (TSGP) to export natural gas to customers in Africa & Europe, it will add billions of dollars annually to our national revenue.