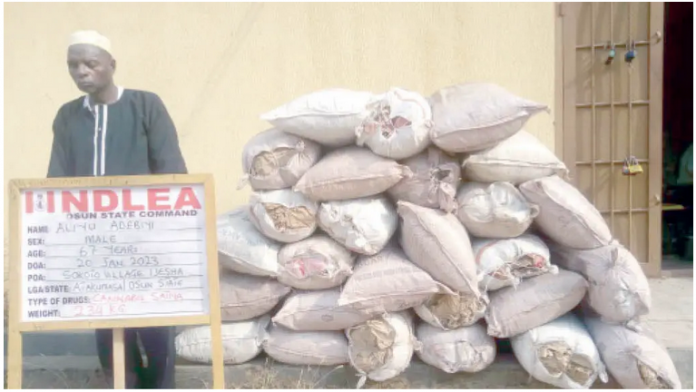 Operatives of the National Drug Law Enforcement Agency (NDLEA) have arrested a blind 67-year-old man, Aliyu Adebiyi, in whose house they found 234kg of Indian hemp at the Sokoto village, Owena Ijesa in Atakumosa East LGA of Osun State.

Spokesman of the agency, Femi Babafemi, who disclosed this on Sunday in Abuja, explained that the suspect, in his statement, said a drug dealer kept the consignment with him for a fee of N6,000 per month and had paid three months upfront.

Similarly, a leper, Haruna Abdullahi (45), was arrested at Garko town in Kano State on Thursday, January 19, and 2.2kg of Indian hemp and quantities of diazepam and Exol were recovered from him.

Babafemi further said that desperate efforts to bring into Nigeria 126.95kg of cocaine and skunk concealed in herbal tea packs and imported vehicles by drug cartels from Brazil and Canada were thwarted at the Akanu Ibiam International Airport (AIIA), Enugu, and the Tin Can seaport in Lagos by NDLEA operatives.