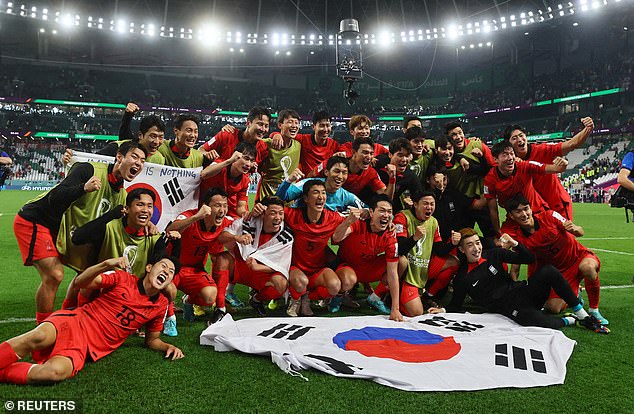 The face mask was thrown in the air on the final whistle and Son Heung-min was liberated. It would be an eternity before South Korea felt the same. Paulo Bento’s team had honoured their side of the bargain with a 91st minute winner against his native Portugal but one more goal for Uruguay against Ghana and it would be the South Americans who advanced at their expense. For seven long minutes South Korea waited for Uruguay to finish, while gathered around mobile phones in the centre circle, and then came the eruption.

When the torment was finally over South Korea’s players sprinted to their fans behind the goal where the Wolves striker Hwang Hee-chan had completed a stirring comeback when pouncing on Son’s immaculate assist. The Tottenham striker had been relatively quiet until the 90th minute, standing out mainly for the protective mask on his face, but then he collected a clearance from a Portugal corner deep inside his own half and ran. And ran. And kept on running until he reached the edge of the Portugal penalty area, where he threaded a pass through the legs of Diogo Dalot to leave Hwang with a place in the last 16 and the hopes of a nation at his feet.

Not even the pain of a hamstring injury could impede the forward and with one cool finish South Korea had reached the knockout stage for the first time since 2010. Well, almost. Had Uruguay won 3-0 they would have secured second place behind Portugal on goal difference. Two-nil meant tears of despair for Luis Suárez, and tears of joy for Son.

“Before the match Son told me I was going to create something today,” said the match-winner. “He said we trust you. When Son got the ball I was convinced he would pass to me and it was an excellent pass. It made my job easy. As a Korean citizen I am extremely proud and would like to thank all the Korean fans. I am glad I was able to give this present to them. I just wanted to contribute after missing the first two games. It was still a risk for me to play today but I don’t care what happens to me physically.”

South Korea had needed Ghana not to win or Uruguay not to win by too many in the other Group H finale but also to forget about permutations elsewhere. Their task was straightforward – just win – and appeared to have been assisted by the Portugal coach Fernando Santos’s decision to make six changes from the team that beat Uruguay, with only one enforced. A nervous opening undermined any advantage that may have been offered by the team sheet, however.

Portugal, already qualified and ultimately securing the first place finish that should put them in a different half of the draw to Brazil, led inside five minutes courtesy of a simple but sweetly executed goal. The defensive veteran Pepe released Dalot in space down the right and the Manchester United full-back brushed aside a weak challenge from Kim Jin-su to advance into area. Dalot picked out the darting run of Ricardo Horta to the near post and the forward swept a fine first time finish into the far corner.

It was a gift that left one Portuguese coach in the crowd fuming. The South Korea head coach Bento, a former Portugal manager, was sat in the stands as a result of his red card in the aftermath of the defeat to Ghana. He claimed he would sing both national anthems to keep his compatriots and his employers happy. In the end he sang neither. Bento’s assistant, Sérgio Costa, took charge in the technical area. They witnessed an encouraging response from South Korea to the early setback with their threat from set-pieces, and Portugal’s weakness at defending them, offering a clear route back.

South Korea levelled when Portugal made a collective mess of attempting to clear Lee Kang-in’s corner. Both Dalot and Rúben Neves failed to connect with defensive headers at the near post and, as the ball sailed through, Cristiano Ronaldo turned his back for some inexplicable reason. The cross cannoned off the Portugal captain’s back and dropped to Kim Young-gwon, who swept a shot beyond Diogo Costa at close range. It was not Ronaldo’s day, much like Uruguay had not been his night. Chasing the one goal that would draw him level with Eusébio’s World Cup record of nine for Portugal, Ronaldo was thwarted by the goalkeeper Kim Seung-gyu when clean through – though he also appeared offside – and was unable to convert a difficult diving header after the keeper parried Vitinha’s drive.

To the mass disappointment of Ronaldo’s fan club inside Education City, the superstar was sensibly substituted with 25 minutes remaining. He was also insulted by a South Korea player after the final whistle. “The player from Korea was insulting him, telling him to go away, so that is the reason why he was angry,” said Santos. “He [was] verbally aggressive, he was speaking in English to Cristiano, and Cristiano said ‘Perhaps he had a bad day’.”

For a team needing one goal to qualify there was remarkable little urgency to South Korea’s second-half performance until Son set off on his galloping run with seconds remaining. Everything would change in an instant.