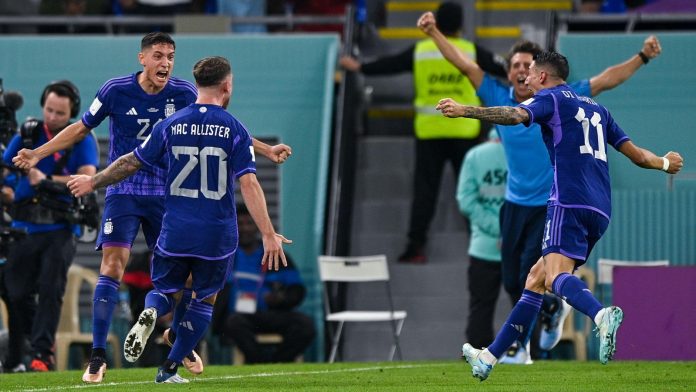 As Lionel Messi zigzagged this way and that it sometimes seemed that Argentina’s No 10 must be electrically powered and perhaps operated by remote control.

Although Brighton’s Alexis Mac Allister scored the vital breakthrough goal for Lionel Scaloni’s side, it was Messi’s dedication to, in equal measure, bewitching his adoring public and bewildering Poland that really made the difference.

Well before the end everyone had, almost, forgotten that a player who spent much of the game slaloming past often helpless markers had missed a first-half penalty. When the music stopped and the final whistle blew Manchester City’s Julián Álvarez had joined Mac Allister on the scoresheet yet, miraculously, a thoroughly overwhelmed Poland still followed their tormentors into the last 16 thanks to a superior goal difference to Mexico.

Talk about progressing by the skin of your teeth. Had Lautaro Martínez not missed a late sitter, Poland would have been boarding a flight to Warsaw onThursday. At least it means Robert Lewandowski will fight another day at a World Cup. The traffic was far too one-way for Poland’s talisman to make the desired impact but “Lewangoalski” surely deserves at least one more moment in the Doha sun.

Few would bet against it shining on Messi and Argentina for a while yet. If Messi exists in anyone’s shadow it is that of the late Diego Maradona. In making his 22nd World Cup appearance he eclipsed his compatriot’s tally of 21 games.

Statistics, though, were a mere sideshow on a night when Argentina fans demanded further evidence that their side’s opening group game defeat to Saudi Arabia was a freak aberration. The South American hordes packing Stadium 974 needed reassurance that it had not been the first symptom of a worrying new fault line emerging within Scaloni’s side.

Given that every other person seemed to be wearing a pale blue and white shirt with either Maradona or Messi on the back, the latter bore quite some responsibility. Could Messi upstage Lewandowski, Poland’s record goalscorer and the striker who replaced him at Barcelona?

The good news for the adoring audience was that Messi seemed very much in the mood to destabilise Poland’s defence. In the first 15 minutes alone, he forced Wojciech Szczesny into a couple of, albeit fairly comfortable, saves after dodging and brushing aside assorted Poland defenders. Not to be eclipsed entirely, Lewandowski sporadically looked capable of offering a masterclass in nailing the art of the No 9 role but lacked the service to conduct it properly. A glimpse came when, holding the ball up and holding off markers with equal aplomb, he conjured a decent opening for Krystian Bielik but a midfielder currently on loan at Birmingham from Derby responded with a tepid shot directed straight at Emiliano Martínez.

Poland needed to make the most of those, extremely rare, chances as, for protracted periods, Lewandowski found himself in less than splendid isolation as his teammates manned the barricades against an impressively fluent, tempo-setting Argentina.

When a wonderful, defence-bisecting, chipped pass from Messi left Marcos Acuña with an inviting heading opportunity Poland looked relieved he could only nod it gently into Szczesny’s arms. Earlier, Scaloni’s left-back had failed to make the most of another astute Messi delivery after shooting with his weaker right foot and seeing the ball arc over the bar.

Even so, the Messi-Acuña axis posed considerable problems for Poland’s right-back, Matty Cash. Not that the Aston Villa defender was the only one of Czeslaw Michniewicz’s players experiencing raised stress levels. The entire team lived dangerously as Álvarez saw a shot blocked, Acuña headed wide and Szczesny backpedalled desperately to claw Ángel Di María’s cross out from under the crossbar straight from a corner.

It frequently seemed as though the former Arsenal goalkeeper was resisting Scaloni’s blue-and-white tide single-handed. Typically, Szczesny performed minor wonders to deny Álvarez after Mac Allister’s brilliant pass and then found himself, extremely harshly, deemed to have conceded a penalty after brushing Messi’s face with a hand as the pair collided after the ball had gone.

Precisely why the spot-kick was awarded after a VAR review may provoke debate for some time but justice appeared to be done when Szczesny dived superbly to his left, and saved Messi’s penalty.

With Poland barely touching the ball in Argentina’s half it was extremely one sided but as long as Michniewicz’s central defenders continued clearing a barrage of crosses the impasse endured.

Their luck ran out a minute into the second half when Nahuel Molina’s cutback reached Mac Allister and, despite failing to make the truest right-footed connection, his shot narrowly evaded Szczesny’s outstretched fingertips as it grazed the inside of a post en route to the back of the net.

After that, Messi’s quick feet – is he really 35? – and even faster brain took over. When Álvarez met Enzo Fernández’s ball, having taken a controlling touch and swivelled seamlessly before lashing the ball into the roof of the net, it was, effectively, all over.