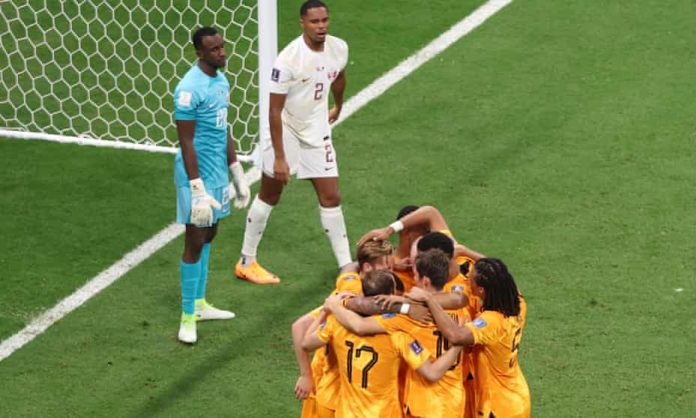 After the Netherlands coasted into the last 16 as Group A winners, Louis van Gaal was in classic defiant form, going toe-to-toe with those claiming that watching his team is akin to “grinding teeth”.

The victory featured a Cody Gakpo strike which made him the tournament’s joint-top goalscorer with three, alongside Kylian Mbappé and Enner Valencia,plus one for Frenkie de Jong, who endured sleepless nights in the buildup. So while Qatar bow out of their World Cup with a single goal and zero points, the Netherlands can begin to dream a little.

What a romantic story a first triumph for the Oranje under Van Gaal would be: to see the 71‑year‑old come back from prostate cancer to guide his nation to global glory would be straight from the top drawer of tear‑inducing scripts.

There is, though, a long way to go and the Netherlands will have to up the quality and speed of their game. Van Gaal bridled when this was raised. “I don’t agree with you and I’m not going to expand on that,” he told a reporter. “You have a different perspective to me. Why don’t you write down that it’s terribly boring. If you think it’s boring why don’t you go home.”

When the reply came that they had to stay and that watching the Netherlands was like gnashing molars, Van Gaal remained unmoved. “OK. We will see you then. I don’t agree with you; I think everyone would be rather proud we’re progressing to the next round and I think people know why you’re asking these questions. I don’t think things are as bad as you say.”

Van Gaal does possess the players to sprinkle more stardust into how his unit performs. Memphis Depay, making a first start of Qatar 2022, is one and was key to his team’s first strike, which followed a controlled yet ponderous opening. The former Manchester United forward tapped Daley Blind’s pass on to Gakpo, who executed a one-two with Davy Klaassen and, with three Qatar defenders closing, danced through and rolled home a third goal in the same number of World Cup outings.

The three-time losing finalists leading the debutants was hardly news, yet there were fleeting moments of promise from Félix Sánchez’s men, one of which involved Abdelkarim Hassan breaking along the left and sweeping over a ball that Virgil van Dijk needed to scramble clear. But the play illuminated a faultline: the inability of those in white to break in numbers meaning Hassan had no one to aim for and so had hoofed over in hope only.

A soporific half closed with a Depay effort and the sides wandering off with, surely, only one possible victor. Yet Akram Afif kept the Netherlands — and Nathan Aké — honest by dropping a free-kick in front of Andries Noppert that the Manchester City defender bounced to safety.

Ruthlessness can be the difference at this level and Van Gaal’s men showed how when doubling the lead. After a couple of shimmies Denzel Dumfries, the right wing-back, poked the ball to Klaassen and Klaassen’s cross was deflected on to Depay, whose control via a knee allowed him to blaze at goal. Meshaal Barsham made a brave stop but De Jong, who also admitted to a sore throat beforehand, hammered home.

For the closing phase Van Gaal could remove Klaassen and Depay for Vincent Janssen and Steven Berghuis respectively. The coach went close to enjoying an instant dividend when the pair combined but Berghuis’s finish was chalked off, via the VAR, for a Gakpo handball earlier in the move. Dumfries also went near to a third but Barsham was able to tip his near-range attempt around his left post. What was a stroll, more or less throughout, ended with Netherlands coasting through. They will have to, perform better to continue to the final.

Of Gakpo, Van Gaal said: “He has only been playing for PSV for two or three years and has always played on the left side. He didn’t want to play at centre or at No 10 and now he does want to play there and thinks I’m a great coach. He has the personality to become a star here.”

It was put to Sánchez how Qatar’s record is the poorest hosts’ performance. “Talking about statistics – you can use them as you want,” he said. “The reality is we are a country with 6,000 football licences so this was a likely situation. We never thought to set a goal of getting to the round of 16 or the quarter-finals. We wanted to see what we could do. We are very realistic about what we can do. You can use statistics but we have to make our own assessment because that’s what really matters to us.”