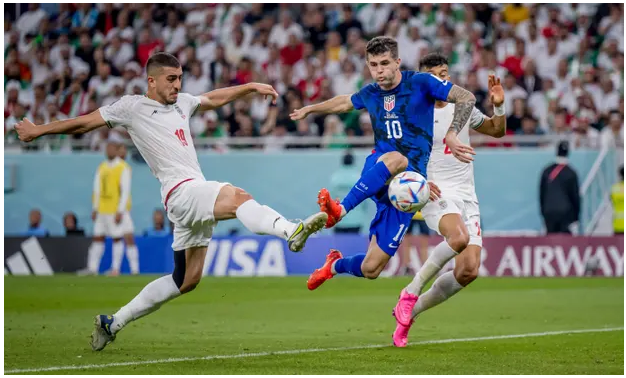 This was a game too far for Iran. Their World Cup campaign was short but will not be wrenched from the memory easily, the harrowing domestic context colouring their every step. When the dust has settled they should take huge pride in having remained competitive despite such a varied and extraordinary set of external pressures; the team’s reaction at full time, many of them falling to the floor, told of the toll recent weeks have taken.

It is the USA who will join England in qualifying from Group B, though, and they will face the Netherlands on Saturday. They needed the win and deserved it, Christian Pulisic scoring seven minutes before half-time but sustaining an injury in the process. It was a cool, controlled performance and a fixture whose pre-match storylines seemed endless passed without any flashpoints.

That might have been considered a surprise after the stormy exchanges that dominated the buildup, including but nowhere near limited to an attempt by Iran’s football association to get the USA banned for using an altered version of their flag on social media. Comments by Carlos Queiroz, the Iran manager, about social problems in the USA had also added spice and that is before anyone factors in the longer-term history between the two.

After the talking it must have been a relief for both sets of players to get started. There was no joint photograph of the teams before kick-off, as there had been when these countries faced off in Lyon at the 1998 World Cup in France, but anything seeking outward signs of enmity as they shook hands would have been looking for something that was simply not visible. As they had before defeating Wales, the Iran side opted to sing their national anthem. Some displayed more enthusiasm than others and there was, once again, the sound of whistles from the stands as swathes of Iran’s support made no secret of the anguish caused by their nation’s regime.

They subsequently channeled their energy into support for Queiroz and his players. The din was quite something and so was the silence, sharp and sudden, when Pulisic gave their opponents the edge. It had been coming: while proceedings had swung from end to end early on there had been a decided shift in balance over the previous 15 minutes, the USA calling the tune and doing everything bar create a clear chance.

The goal was beautifully worked, its execution straight from the training ground. Everything had to be perfect and it was: from Weston McKennie’s 45-yard diagonal ball towards Sergiño Dest, to the right-back’s run and deliberate header across the six-yard box, to Pulisic’s sharply-timed dart and adept finish from close in. Pulisic took a clattering from the Iran goalkeeper, Alireza Beiranvand, upon converting but he had been richly rewarded for his bravery.

It meant Pulisic had no cause to regret missing another first half-chance, a header straight at Beiranvand. Later in the half Timothy Weah similarly failed to generate enough power and, shortly before the goal, blasted off target after unselfish hold-up play from Josh Sargent. Balls had been flashed across the box by Dest and Antonee Robinson; nobody could apply a killer touch and the USA’s concern, until Pulisic bared his teeth, was a familiar lack of bite.

Weah nearly found Sargent for a chance that could have doubled the lead and, just before the interval, was flagged offside by a knee after finishing the Norwich forward’s pass. Iran had lost the grip that they enjoyed early on, when they attacked with the confidence of a side that knew the value of scoring first here. Their initiative only translated into one might-have-been when, in the 20th minute, Mehdi Taremi fluffed a golden opportunity to offer Sardar Azmoun a sitter.

They would have to offer more in the second half and Azmoun did not appear after the interval. Iran were already missing the suspended Alireza Jahanbakhsh and their options for a comeback did not look promising. Pulisic did not return out either, depleting the USA’s resources, but Sargent immediately shot at Beiranvand in a continuation of their earlier gusto.

Finally Iran came close when Saman Ghoddos, who had replaced Azmoun, headed over from with Dest doing just enough to prevent an equaliser. It was their first goal attempt and the bank of fans behind it roared their approval.

The USA looked fitter and quicker. As against England, the midfield of McKennie, Tyler Adams and Yunus Musah covered every blade of grass and worked possession cleanly. But Iran had to take risks and another chance came Ghoddos’ way in the 65th minute when, favourably placed but with the ball just behind him, he slashed two yards wide.

As the minutes ticked down, the USA were content to hold onto what they had. Direct threats were few, although Iran screamed in vain for handball when the substitute Shaq Moore let a dangerous right-wing cross roll up his body. A late twist never looked especially likely but Ramin Rezaeian nearly provided it when heading an added-time free-kick inches wide. Taremi almost converted at the death for Iran, who again howled for a penalty, but it was not enough.