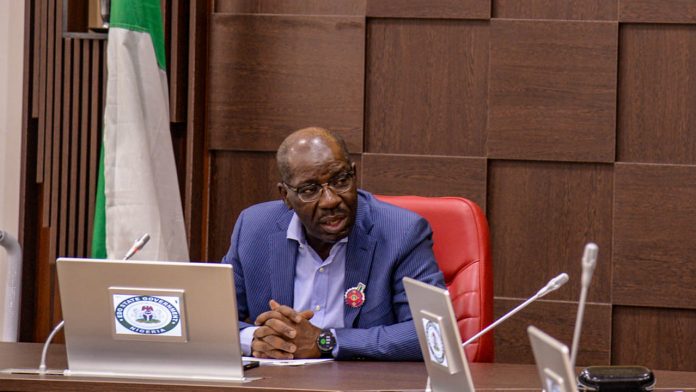 Edo Government on Wednesday said that it received N2.1 billion from the 13 per cent derivation fund paid by the Federal Government to oil-producing states.

The state Commissioner for Finance, Budget, and Economic Planning, Joseph Eboigbe was reacting to the statement by Rivers Governor Nyesome Wike that Edo received N28 billion.

Speaking to newsmen in Benin, Eboigbe said that the statement was false.

He said N28 billion was approved for Edo which would paid over a period of five years, adding that only three tranches of N700 million amounting to N2.1 billion had so far been received.

“A total of about N1 trillion was established and refunded to the oil-producing states.

“It went through the process of economic council and a distribution method was adopted from the Revenue Mobilisation Allocation and Fiscal Commission (RMAFC).

” They now established what will go to each state, Edo state’s share of that figure was N28 billion.

“What was also approved was the way and manner the money will be distributed to the states. The net amount will come to each state over a period of five years.

“Each year, you will have quarterly remittance. The releases started in October, and we have only received three tranches of N700 million which amounted to N2.1 billion and this is what we have received.”

“This is verifiable in our bank accounts. So, we have received only three quarterly releases so far. This is what has come into the state coffers.

” It is less than our monthly internally generated revenue which is N3 billion monthly,” he said.

Also speaking, the state Commissioner for Information, Chris Nehikhare, said the state government had judiciously used all its resources.

He said that Edo was the only state paying N40,000 minimum wage to workers, adding that monies were being spent on construction of roads, schools, hospitals, and reconstruction of the state secretariat complex among others.

Mr Crusoe Osagie, the Special Adviser to the state governor on Media, said some governors were only playing politics with the 13 per cent derivation funds. (NAN)