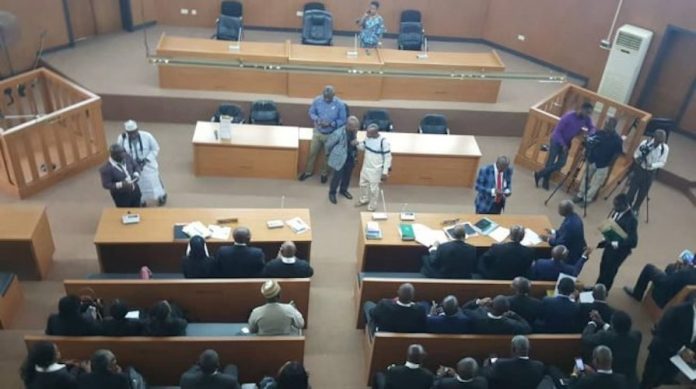 The Senate Committee on Ethics, Privileges and Public Petitions, has reopened the case of assault levelled against the Chairman, Code of Conduct Tribunal (CCT), Mr Danladi Umar.

Chairman of the Senate panel, Ayo Akinyelure, who addressed newsmen on the matter on Wednesday in Abuja, said that the case against Umar had been reopened.

The News Agency of Nigeria (NAN) reported that the CCT Chairman was seen in a viral video, allegedly assaulting one Clement Sargwak at the Bannex Plaza in Wuse 2, on March 29, 2021 .

In seeking redress, the victim, filed a petition against Umar through his lawyers to the Senate Committee on Ethics , Privileges and Public Petition to investigate .

In his address, chairman of the committee said that: “There was a petition against the CCT Chairman that he assaulted a young Nigerian, Sargwak.

“The Senate believes that nobody is above the law. Both the young and the old voted for us to represent their interest in the National Assembly.

” The CCT Chairman infringed on the right of a young Nigerian who had no money to approach the Court, brought his petition to the Senate.

“Rather than appearing before our Committee, Umar went to Court claiming that the Senate had no right to put him on trial.

“The Senate suspended the hearing on the matter till the outcome of the judgment. The High Court has now ruled the Senate has the right to continue the case.

“The Senate decided to reopen the case because it was a declarative judgment. He was to appear before us today but instead, came with court papers claiming that he had appealed the judgment.

“He has now told us through his lawyer that he will never appear before the Senate Committee because the matter is already before the Court of Appeal.

“Instead of apologising to the victim and his family, and possibly settle the bills of their lawyers, he believes that he could use his position to suppress justice. We will never allow it,” Akinyelure said.

NAN reports that Umar had included in the suit as stated in the originating summons dated July 13, 2021, the President of the Senate Ahmad Lawan, the Senate Committee on Ethics, Privileges and Public Petitions as well as the Attorney-General of the Federation Abubakar Malami .

In the suit with file no FHC/ABJ/ CS/671/2021 , Umar challenging “Senate’s Constitutional power to conduct investigation and purpose for which it is exercisable.”(NAN)