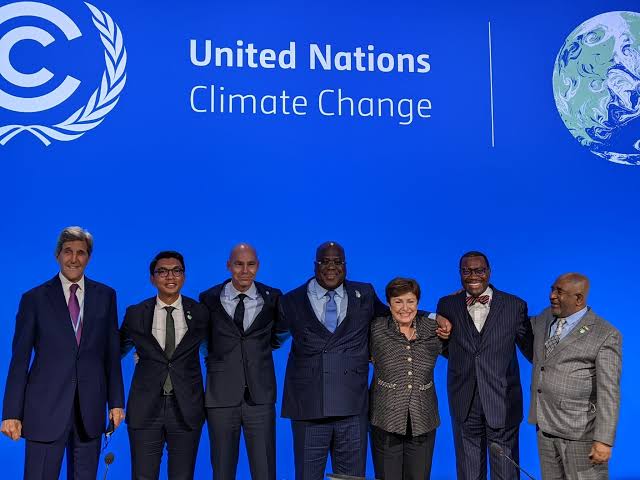 World leaders have called for urgent action to raise climate funding ahead of the United Nations Climate Change Conference (COP27) in Sharm El-Sheikh, Egypt, in November.

This is contained in a statement issued by Emeka Anuforo of the Communication and External Relations Department of AfDB on Thursday.

The President of AfDB, Dr Akinwumi Adesina joined other leaders at the second ministerial meeting on climate and development held on the sidelines of the ongoing UN General Assembly on Tuesday.

The top-level meeting called for climate and nature objectives to be mainstreamed across financial and economic policy, and significant action points to be presented at COP27.

U.S. Special Presidential envoy for climate, Mr John Kerry said: “we are working on something serious to be put on the table at Sharm El-Sheikh.”

“We are late. We must act. I’m fed up with saying the same thing too many times in the same meetings. Business as usual is the collective enemy. Its time for action.”

Kerry spoke about his recent trips to Nigeria and Senegal, which were among 48 sub-Saharan countries that contributed less than 0.55 per cent of carbon gas emissions.

He, however, said they suffered disproportionately from the impacts of climate change.

Kerry said the world must change the way it did business ahead of COP27.

He called for the involvement of the private sector to raise the financing that was required to tackle climate change.

“Climate and development go together. The key point is: where is the money? All promises were left in Paris.”

Adesina also probed the commitment of developed countries to deliver on the promises made at COP26 in Glasgow and the 2015 Paris Agreement.

He painted the reality of climate change in some of the African countries he recently visited, describing the situation as “heart-wrenching”.

“In Cape Verde, they have not had rain for nearly three years. In Mauritania, vast areas are deserted because of lack of rain.

“Africa is suffering, choking, and is in serious financial distress for what it did not cause. There must be a greater sense of urgency not in talking, but in doing and delivering resources that the continent needs very desperately.

“It is really about adaptation. We desperately need to have the financing for adaptation.”

Adesina also spoke about the bank-led Africa Adaptation Acceleration Programme, which was mobilising 25 billion dollars of financing to support the continent at scale.

Also speaking, Bill Gates, co-founder of the Bill and Melinda Gates Foundation, agreed that adaptation never got the attention it deserved.

“We need to make sure we are funding the things that have the highest impact.”

Gates emphasised the urgency of action, including investing in technologies and scientists in developing countries.

“The first is that it should probably be focused on low-income countries.

“I do not think the world community is saying that we should spend less on vaccines in order to fund climate adaptation, but rather that we want this money to be incremental in the aid budget.”

Mujawamariya said young people were worried about their future.

“Let us use today’s ministerial meeting to learn from one another and share practical and tangible actions that will make young people proud of us.

“We are here together, working hand in hand to address the climate crisis to ensure a bright future for our young people.”

ThevExecutive Secretary of the UN Framework Convention on Climate Change, Simon Stiell echoed the need for what he termed “a series of actions” to mobilise finance.

“We need to get the whole architecture working. Climate disasters are increasingly coming in a variety of forms.

“We are formally in a decade of decisive action,” Stiell said.

Furthermore, speakers advocated a coordinated strategy that involved funders, partners, and the private sector working together to finance climate change, especially for adaptation.

Additionally, they urged countries to honour the promises made at the 2021 UN Climate Change Conference in Glasgow. (NAN)