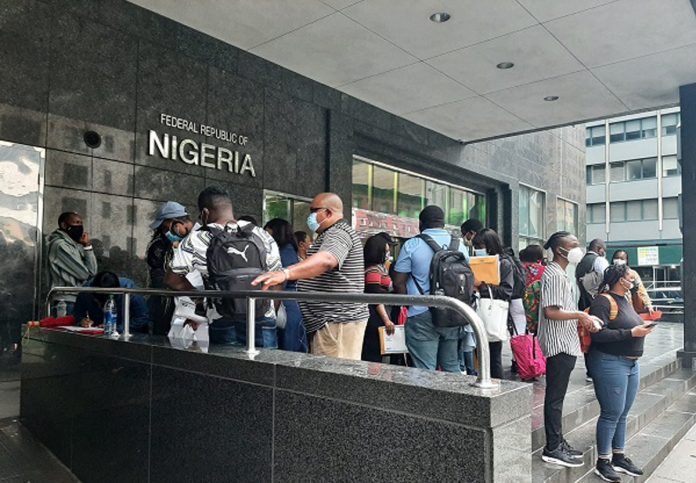 One of the mechanisms Nigerian missions abroad has adopted to inform Nigerians about the latest developments on consular and other services is through Town Hall meetings.

In New York, the Consulate General of Nigeria every quarter hosts Town Hall meetings with the Nigerian community within its jurisdiction.

The 6th edition of the Town Hall meeting, held on Aug. 19, virtually and focused on progress made in addressing the shortage of passport booklets, the introduction of a new Enhanced E-passport, and registration for National Identity Number (NIN)

The meeting also focused on passport intervention programmes as well as information on the Independence Day parade slated to hold on Oct. 1, among others.

In his remark the Consul-General of Nigeria in New York, Amb. Lot Egopija, told Nigerians that the mission did not have passport booklets for a month, resulting in a backlog.

He, however, acknowledged the role the Organisation for the Advancement of Nigerians (OAN) and other Nigerian associations played in reaching out to Nigerians in positions of authority during the period.

“We want to acknowledge that the Federal Government has responded positively to the request and has supplied the Consulate with 6, 000 Passport booklets.

“We are doing our utmost best and before these booklets get exhausted, we hope to get supplies to make sure we address booklets shortage,’’ the envoy said.

Egopija said the new Enhance E-passport process had some problems which the Consulate had been working hard to resolve.

He said one of the problems was to publicise the various vendors that have been engaged to help Nigerians with NIN, which is a compulsory requirement to get the new passport.

The envoy said the Consulate would be embarking on a passport intervention exercise in Indianapolis, the capital city of Indiana in September.

In addition, he informed the nationals that the Consulate would be partnering OAN and other Nigerian communities to organise the 2022 Independence Day Parade, tagged: “Our people, our culture.”

Egopija, however, invited all Nigerians to come out en masse for the parade, noting that the Bayelsa State government has agreed to sponsor a musician from Nigeria.

“We are expecting some cultural groups coming from Nigeria and we also encourage local cultural groups here to come out and showcase their culture because in doing that, we will attract tourism to the country,’’ he said.

Reiterating Egopija’s call to attend the parade, Mr Francis James, a Board member of OAN said the event would be a great opportunity to celebrate together.

“Come out and have a good time with your fellow Nigerians.  It is not government event, it a Nigeria event so come out and be part of it,’’ he said.

Briefing on consular delivery services, Consul Okechukwu Iroamachi, said the Consulate was working hard to reduce the backlog for two months caused by the shortage of passport booklets.

Iroamachi, Consul in charge of Immigration and Community Relations, elaborated on the three categories of the Enhanced E-Passport.

According to him, Nigeria is one of the countries in the world that has introduced the new Passport and first in Africa.

“It was launched in Washington D.C. on July 5 by the Minister of Interior, Rauf Aregbesola and we were immediately supplied with 6,000 of the booklets in New York.

“The Nigerian government has approved some vendors to process NIN with a token fee to ease the process of the passport for Nigerians in the diaspora.’’

The Consul said information on NIN registration has been posted on the Consulate’s website, urging the nationals to check for necessary information on the website.

Briefing on Passport production, Immigration Attache II, Yarima Yakubu said the Consulate had enough booklets and had been working hard to clear the backlog.

“We have cleared backlog up to April 20, so we implore those that are due for collection to exercise patience with us,’’ he said.

Also speaking, Mr Philip Adekunle of Knowledge Square, one of the partners of the National Identity Management Commission (NIMC), carrying out NIN for Nigerians in the diaspora spoke on the necessity of getting the NIN.

“NIN is the foundation number for Nigerians home and abroad to do any business with the government. That means, it comes before your passport identity.

“It comes before your bank identity or other identities that you may have, for dealing with the Nigerian government; NIN is similar to what we have in the U.S- Social Security Number,’’ he said.

According to him, the company has 14 locations in the U.S., pledging the availability of its services to Nigerians in the United States.

Answering a question on if the nationals could still pay for the old passport, Iroamachi said the platform of payment for the old Passport was shut down in July and that Nigerians could only pay for the new Enhanced E-Passport.

Also, in response to using expired Passport to travel, he advised Nigerians to always check with the Airlines, noting that the policy had not been communicated to relevant stakeholders.

“In the diaspora, the World Bank is not paying so the Federal Government allows us to charge a nominal fee of 50 dollars or equivalent.

“The government also allows us to charge 70 dollars if we take the registration to the person,’’ he said.

Community leaders and the nationals commended the Consulate for consistently holding Town Hall meetings to discuss engage Nigeria community within its jurisdiction on ways of improving its consular services.

As Nigerians engage in legitimate businesses across the world, stakeholders contend that similar Town Hall meetings should be replicated in other countries and cities where Nigeria has its missions. They say it will go a long way in educating Nigerians on what the missions are doing to make their residency hitch-free and keep the missions abreast of what Nigerians expect from them. 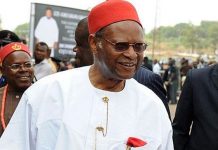 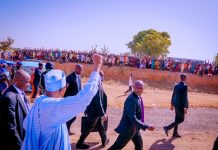 In Buhari’s Time, Oil Is Finally Found In The North By Femi Adesina