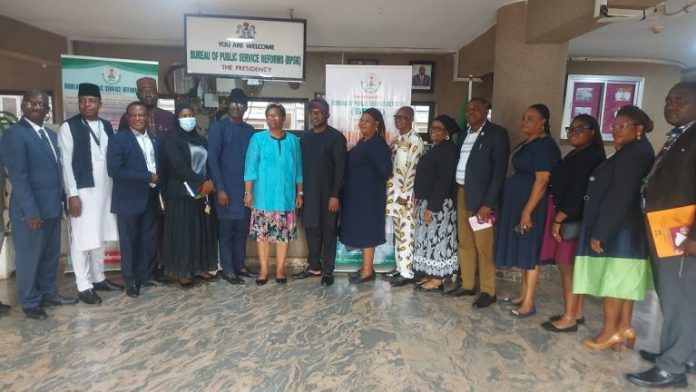 The Director-General, Bureau of Public Service Reforms, Mr Dasuki Arabi, said the Federal Government was committed to transforming the public service to provide world class services to the people.

Arabi said this when he interacted with a Lagos State Government delegation that was at the Bureau in Abuja on Tuesday, to seek ways of strengthening the state public service.

Arabi, who spoke virtually with the delegation, said the reform initiative was to ensure effectiveness in policy implementation.

He added that it would also boost professionalism, integrity, excellence and passion to secure sustainable national development.

The DG also informed the team on the reforms strategies and how they operated.

He stated that the National Strategy for Public Service Reforms (NSPSR) has three main goals.

The MDAs are to achieve a world class PSR by 2025, they are to transform and reinvigorate the service.

“The national strategy for public service reforms has four pillars.

“Pillar one is coordinated by the Office of the Secretary to the Government of the Federation with an enabling institutional and governance environment.

“Pillar two is coordinated by the Federal Ministry of Finance, Budget and National Planning to create an enabling economic environment.

“Pillar three is also coordinated by the Federal Ministry of Finance, Budget and National Planning for public financial management reforms.

“Pillar four is coordinated by the Office of the Head of the Civil Service of the Federation (OHCSF) for civil service administration reforms,” Arabi said.

He said that the challenges include “weak implementing capacity in MDAs, emergence of reforms fatigue such as “we are tired of reforms”.

Arabi, however, said measures had been taken to address the challenges.

“We made available a robust monitoring, evaluation and reporting system and decentralized responsibilities to create more passion by implementers or drivers of the reforms.”

He added that the bureau had established reforms coordination, service improvement and innovation departments, in liaison with SERVICOM and OHCSF.

The DG further explained that the departments served as focal points for driving all changes and reform initiatives, as well as areas for improvement.

He said that adequate funding was necessary to drive reforms and ensure efficiency in service delivery.

Arabi said, ” it was also important to improve working relationships and engagements with the Bureau to act as guide and enhance its effectiveness.”

Earlier, AbdirRaman Lekki , Assistant Director, Lagos State Management Service Department, Office of Transformation, Creativity and Innovation, said the team was on a study visit to the bureau, as part of efforts to strengthen the public service delivery system in the state.

“The aim of the visit is to study how the reform operates and also the fact that Lagos State currently wants to establish a structure for reforms in all MDAs.

“Since the federal government had implemented something like that, we decided to come and see what was the story that led to that and how it has fared over the years.

“So, then we can understand how it was done, what has worked well, what can be improved upon and to see how we can replicate the same and see how we can improve on it in Lagos State.”

He said that part of their plan was to create a reform unit in all MDAs to address challenges in the implementation.

“We decided it’s better we help to create a reform unit within all MDAs so that reforms can be proactive rather than being reactivated,” Arabi said. (NAN