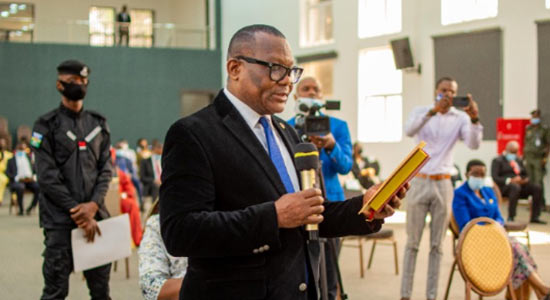 Justice Acha stated this on Wednesday in Benin at the official launching of Volunteers Mediators Scheme in the state.

The News Agency of Nigeria (NAN) reports that the scheme is a brainchild of the Institute of Chartered Mediators and Conciliators (ICMC), Benin branch.

The chief judge noted that if properly deployed, ADR was cost effective and would undoubtedly help to decongest the court.

“It is suffice to say where it is properly deployed, ADR is cost effective, and undoubtedly will help to decongest our court as well as promoting cordial relationship in our homes, offices, business places, society, nation and ultimately, our world.

“As we proceed on this glorious journey, we value the volunteers for your invaluable contribution to nation building, which in its own is also a unique opportunity as you try to practise your skills.

“We commend the German Agency for International Cooperation (GIZ) for living up to its core principle of capacity development and international cooperation through sponsorship of various ADR training over the years.

In his address, Dr Agada Elachi, President of the ICMC, said the scheme was part of the institute’s strategic plans to standardise and expand the frontiers of the practice of mediation in Nigeria and Africa.

The scheme, Elachi said would offer a platform for the speedy, and at no cost, resolution of small claim disputes for the business community and matters that bordered on domestic disputes and interpersonal conflicts.

He explained that the scheme would also be a vehicle to deliver corporate social responsibility by the institute to a Nigerian society.

This according to him, is germaned at this time the country is greatly fragmented by conflict and disagreements.

He, however, called on development partners and relevant stakeholders to support this initiative.

“We are available to discuss the modalities for such support. In this respect, we salute the GIZ’s SEDIN programme for its support to the volunteer mediation scheme.

“It is hoped that members of the public, particularly the indigent, will utilise the scheme.

“This measure, we believe, will promote access to justice,” he said.

Ms Blessing Ajimoti, Edo Coordinator of GIZ’s SEDIN programme, said the agency had been working with Edo and other focal states, to improve the system for commercial dispute resolution and contract enforcement.

Under this partnership, she said SEDIN had supported the Edo Judiciary and other partners since 2020.

“This June and July, SEDIN is expanding its collaborations on affordable and timely dispute resolution through our support for the Benin Branch of the ICMC, to launch the Volunteer Mediators Scheme in the state,” Ajimoti said. (NAN)