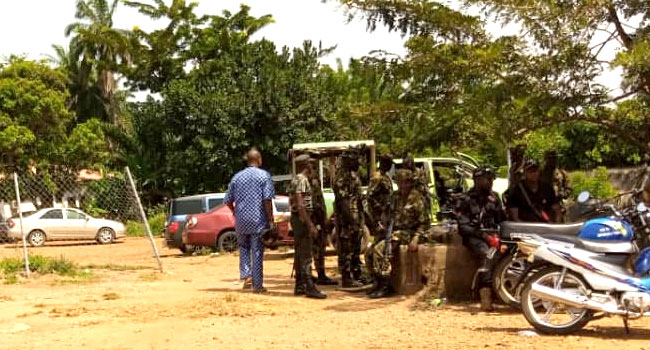 Soldiers have arrested over 100 armed suspected political thugs at the border town of Itawure in Efon Alaaye, Ekiti State.

Police spokesperson in the state, Sunday Abutu, confirmed the arrest to Channels Television on Wednesday.

Abutu explained that the suspects were coming from the Oyo State axis before they were apprehended by soldiers on guard at the town bordering Osun State.

He added that the suspects were arrested with various dangerous weapons, including cutlasses, guns, and charms.

A military source that confirmed the same to Channels Television said the suspects have been taken to Akure, the Ondo State capital for further actions.

Tension has been rife in the state over the governorship primaries of the Peoples Democratic Party (PDP) and the All Progressives Congress (APC) slated for Wednesday and Thursday respectively.

The PDP primary scheduled for today is set to commence as eight aspirants are out to contest for the party’s ticket in the 2022 Governorship election.

The delegate primary election is holding in Ado Ekiti, the Ekiti State capital.

Some of the candidates in the race include former Governor Segun Oni; a Senator and former deputy governor, Biodun Olujimi, as well as former Governor Ayodele Fayose’s deputy and PDP candidate in the 2018 election, Professor Olusola Eleka.

The crisis that trailed a recent ad-hoc delegate congress held by the party had compelled the national leadership of the party to hold a series of meetings which led to the decision to use automatic and statutory delegates only for the primary.