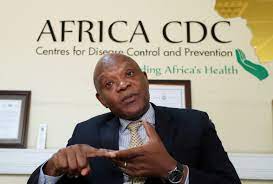 Africa’s top public health bodies on Thursday called for donated Coronavirus (COVID-19) vaccines to come with a shelf life of three to six months so countries could plan their rollouts and avoid a situation where doses expire.

John Nkengasong, director of the Africa Centres for Disease Control and Prevention (CDC), said 2.8 million doses of vaccine had expired on the continent, roughly 0.5 per cent of the 572 million doses delivered to date.

He said 10.4 per cent of Africans were fully vaccinated.

“In terms of the 0.5 per cent, let me be very clear, any dose of vaccine that expired pains me because that is a life that can be potentially saved,” Nkengasong told a news briefing.

“Many countries indicate that they would like vaccines to be donated with at least three months of shelf life, if not more,” Moeti said.

Nkengasong said the expired doses were mostly among those donated by individual countries or via the global vaccine-sharing scheme COVAX, and that they had arrived with “very short notice”.

In contrast, doses of the Johnson and Johnson vaccine acquired by African countries via a scheme organised by the 55-member African Union and delivered with a longer shelf life had not expired, he said.

He said some countries were now refusing to accept vaccines when they saw that the shelf life was only one or two months.

“They prefer not to receive those vaccines because it will create a narrative that vaccines have expired in their countries,” he said, without naming the countries.

“Most countries are very sensitive to that,”

Nkengasong said a focus on the continent this year should be the logistics of moving vaccines from the airports where they arrive at where they are used.

“We’ve seen remarkable uptake of vaccines in settings where we engage the community,” he said.

Nkengasong said 10.4 per cent of Africans were fully vaccinated, a percentage lagging far behind most other parts of the world.

Africa initially struggled to get doses as rich countries snapped up limited supplies.

Deliveries to the continent later picked up, but rollouts have been patchy.

Scientists have warned that low vaccination rates on the continent posed a risk in terms of new variants emerging, which in turn could prolong the pandemic globally.

The Africa CDC, an agency of the African Union, planned to talk to Merck about obtaining supplies of its molnupiravir treatment pill for COVID-19, although talks with Pfizer about its Paxlovid medication were more advanced, Nkengasong also said.

The agency had announced last week it was negotiating for supplies of Paxlovid, joining a global race for a drug seen as a potential game-changer in fighting the virus.

“We don’t have a preference to talk only to Pfizer and not Merck, it’s just that Pfizer has been more forthcoming with their engagement.

“We plan to engage both companies equally,” he said. (Reuters/NAN)