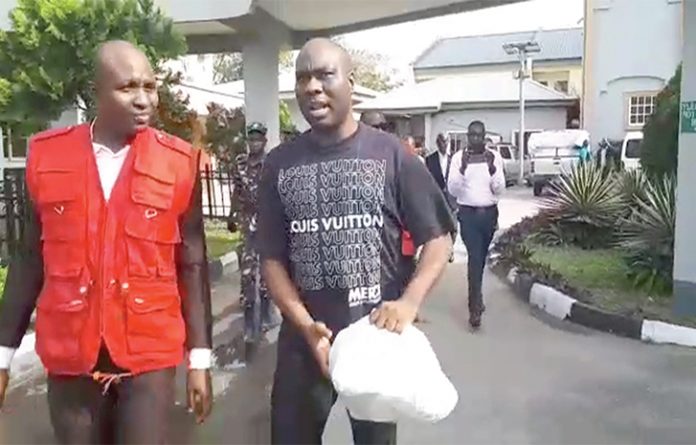 An Ikeja Special Offence Court on Tuesday ordered that a social media celebrity, Ismaila Mustapha alias Mompha, be remanded in the Economic and Financial Crimes Commission (EFCC) over allegations of conspiracy to launder N5.9billion.

The defendant was arraigned alongside his company, Ismalob Global Investment Ltd on a fresh eight-count charge of fraud.

The News Agency of Nigeria (NAN) reports that the defendant is also currently facing trial at the Federal High Court Lagos on a 22-count fraud charges proffered against him by the EFCC.

Other charges are use of property derived from unlawful act, possession of document containing false pretence and failure to disclose assets and properties.

The defence counsel, Mr Gboyega Oyewole, SAN, however informed the court that he had filed a bail application which had been served on the prosecution.

Responding,Oyedepo asked for time to respond to the bail application of the defence.

According to the EFCC, Mompha committed the alleged offence between 2016 to 2019 in Lagos.

The defendant is alleged to have conspired alongside Ahmadu Mohammed now at large to conduct N5.9billion worth of financial transactions with the intent of committing the offence of obtaining by false pretence.

The prosecution alleges that the defendant also conducted other illegal transactions.

“On Jan. 28, 2019, the defendant and his company, with the intent of promoting one Olayinka Jimoh alias ‘Nappy Boy’ conducted unlawful financial transactions in the sum of N32million.

“The said sum involves the proceeds of a specified unlawful activity which is obtaining by false pretence.

“On Feb. 11, 2019 he retained the aggregate sum of N20million on behalf of Jimoh which he was aware that the said sum were proceeds of Jimoh’s criminal conduct (obtaining by false pretence),” he said.

The funds are alleged to be proceeds of crime (obtaining under false pretences).

On Feb. 3, 2020 the defendant allegedly had in his possession a document containing false pretence titled ‘Select Milk Producer J.P Morgan’ which was used to defraud Continental Diary Facilities LLC.

The EFCC also alleged that on Oct. 20, 2019 Mompha failed to furnish information in relation to his interest in expensive watches such as a Rolex Wristwatch, a Hublot Wristwatch,two Piguet Wristwatches, an Iphone 8 worth N70million.

“This is required in page 10 of the Declaration of Assets Forms and is therefore an offence,” the prosecutor said.

Justice Mojisola Dada adjourned the case until Jan. 18 for hearing of the bail application.(NAN)