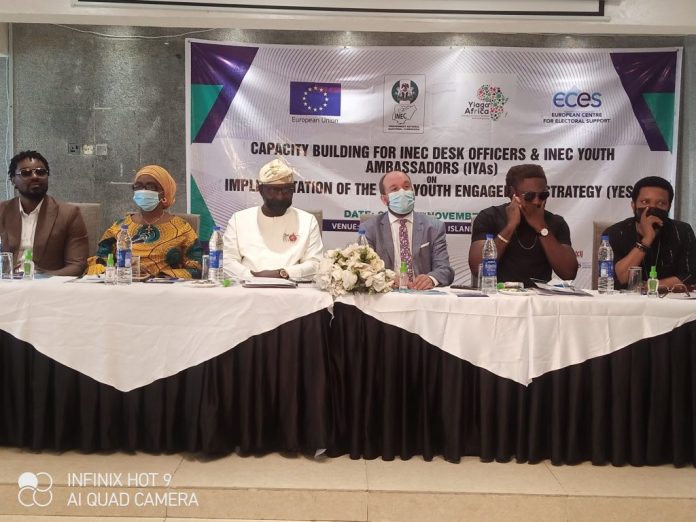 INEC on Thursday,  urged  youth ambassadors to increase awareness on the commission’s resolve to conduct transparent elections in 2023 and to sensitise youths against violence.

The News Agency of Nigeria (NAN) reports that the event was organised by INEC in partnership with European Centre for Electoral Support (ECES), and Yiaga Africa with the theme: “Implementation of the INEC Youth Engagement Strategy (YES)”.

Ogunmola said INEC’s YES document had received a lot of inputs in series of engagements and validation meetings with youth groups, government institutions, development partners and other stakeholders across the country.

He said  the document would give support to INEC’s youth focal activities in a sustainable manner, saying it would help to enliven youth awareness and enlightened participation in the electoral process.

According to him, the meeting for the first line implementers of the strategy is to equip them with adequate knowledge,  needed to ensure effective implementation of the strategy to the benefit of youths in particular and the commission at large.

“Significant barriers to youth political participation occur at different areas, which can  be structural, individual, or organisational. Importantly, election-related violence has a negative impact on youth participation in elections.

“INEC as a responsible institution is committed to addressing the challenges faced by young men and women as an important and dominant segment of the society and voting population to promote their increased participation in the electoral and decision-making process of the country.

“This gathering is to improve the way we do things as desk officers, pay detailed attention in order to avoid failure and enlighten our youth ambassadors to implement the strategy.

“You are therefore, expected to design and work in line with the vision and mission of the commission and its commitment to ensure an inclusive process,” Ogunmola said.

In her remarks, Mrs Blessing Obidegwu, INEC Director, Gender and Inclusivity, who called for an enhanced voter education for youths, said participation of young people in politics was crucial.

Obidegwu said  there was need to boost voter education nationwide with emphasis on youths ahead of 2023 elections.

“This will reduce considerably, if not eliminate the ignorance in the electoral process as well as ensuring active participation by all eligible citizens irrespective of gender.

“Youths are eager for change because the world depends on them. Young people should be encouraged to unite and to become the change they want to see in the world.

“It also demands advocacy for greater political inclusion in the leadership and political space of the nation,” he said.

In his goodwill message, Mr Hamza Fassi-Fihri, Project Coordinator, ECEC, commended INEC for its youth policy in ensuring that youths were better engaged in the electoral process.

“Over the years, INEC has shown tremendous commitment toward the growth, development and substance of democratic tenets in Nigeria,” he said.

Speaking, Mr Alex Cole-Ibeh, one of the representatives of INEC Youth Ambassadors said that INEC’s performance at the Nov. 6.,  Anambra governorship election,  sent a signal that the commission meant well to deliver credible elections.

Cole-Ibeh said that all  young Nigerians were asking was for INEC to increase confidence in the electoral system ahead of the  2023 general elections.

Nwachukwu, also a  style icon and TV personality, urged  all stakeholders to improve transparency at the polls. .(NAN)