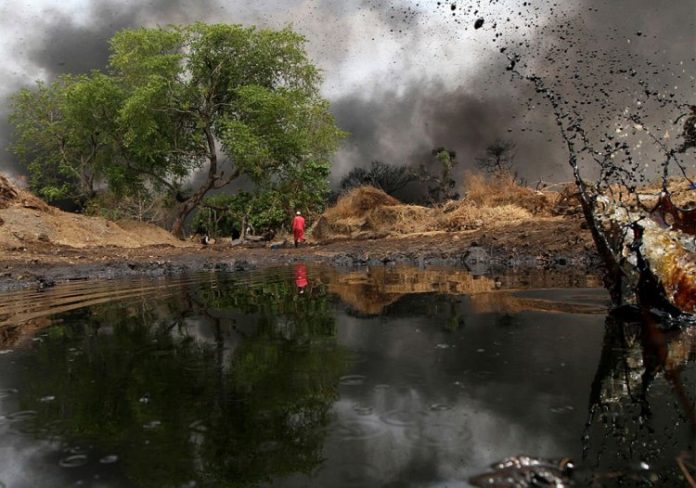 Minister of State Petroleum Resources Chief Timipre Sylva, on Wednesday undertook an on the spots assessment of the oil spill site of Aiteo Eastern Exploration Company, in Basambri, Bayelsa State.

The minister who was joined on the inspection by Engr Gbenga Komolafe Chief Executive Officer (CEO) of Nigeria Upstream Petroleum Regulatory Commission (NUPRC), the traditional ruler of Opu-Nembe Kingdom His Royal Highness King Biobelemoye Josiah, Mr. Israel Adi member of House of Representatives representing Brass/Nembe Constituency said “Mr President is very concerned about the spill that is why he sent me to come and have on the spot assessment of the situation. He feels the pains of the people and wants urgent steps taken to address the problem”.

He noted that the spill was a serious environmental concern that needs urgent measures to contain nothing that no stone will be unturned in dealing with the environmental problem.

The minister disclosed that the relevant agencies have already been deployed in the area to tackle the oil spill adding that “we will need to bring in supports to help us clean up the spill”.

Addressing the Basambri community after inspecting the spill site, Sylva said it was important for him to come to see things for himself to ensure that there was no problem between the oil company and the community..

He expressed the President’s regrets over the spill and noted that “President Buhari will ensure that the situation is immediately remediated”.

Addressing the community Komolafe said they were in Basambri on the instructions of the President to see things for themselves.

He noted that as regulators in the upstream sector of the economy the Commission will ensure that the operators operate within acceptable international standards that will impact positively on the lives of the people in the oil producing community!

Aiteo acquired the Oil Mining Lease (OML) 29 following the 2015 divestment by Shell. The well was acquired for $2.4 billion and consists of the 97km Nembe Creek trunk line which evacuates crude from onshore oil wells within the oil bloc and other operators to Bonny Export Terminal.