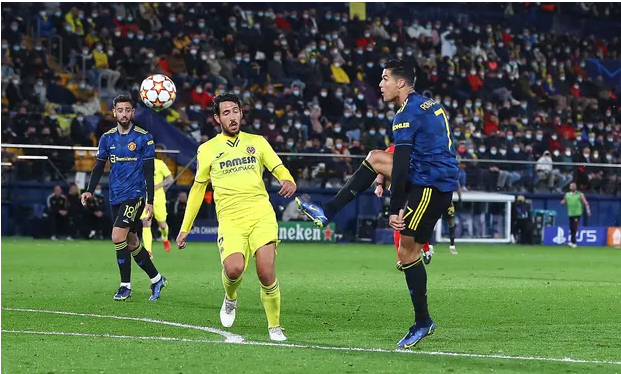 You may have heard this one before. It wasn’t so late this time and maybe it lacked the drama of other days, including the last time these teams met, but it was still familiar. The manager changes, the story doesn’t.

Above all, nor does Cristiano Ronaldo, still scoring at a relentless rate. Villarreal had felt in control, only to lose it with 12 minutes to go, allowing Michael Carrick to begin his time as interim coach to the interim coach with a win that put Manchester United through. The goal that pathed the way to the next round was delivered by No 7.

A second was added in the last minute by Jadon Sancho, smashing a shot in off the bar. The move had been superbly executed by Ronaldo, Marcus Rashford and Bruno Fernandes.
Ernesto Valverde pictured in September 2019 during his time as Barcelona’s manager.

Down on the touchline, Carrick smiled and not without reason. The changes he had made, Ferandes and Rashford introduced with 20 minutes to go, had radically altered the way this game played out. Up at the other end in a glass box atop the stand, United’s fans chanted the name of the manager who had departed, gratitude expressed.
Advertisement

It was done, which hadn’t always looked likely until a dreadful pass from Gero Rulli, the goalkeeper who had scored and saved a penalty when these teams met in the Europa League final, left Étienne Capoue under the kind of pressure Villarreal had often invited and United had seldom applied. The ball fell to Ronaldo who lifted it over the keeper and into the net.

Every single game he has scored in this competition. Six goals in five games sent United through. So did David de Gea’s saves and Villarreal’s error.

The Carrick era was always likely to be brief; as it turned out it was also late to begin, kick-off delayed because of a technical issue the referee, Felix Brych, appeared to have with his headset. As they waited the players passed the ball among themselves, which at least allowed United to complete their longest move this season, until the officials were ready.

When the start came, United and Arnaut Danjuma took the knee, whistled by a few fans. Carrick stook with his hands in his pockets on the corner of a tiny technical area, a place and a posture that didn’t really change at any point. In front of him was a changed team, Luke Shaw, Fernandes and Rashford were left out replaced by Alex Telles, Antony Martial and Donny van de Beek, a ghost here, his presence not really noticed until the referee took his name for a poorly timed tackle just before the break.

Nor was he the only one. Scott McTominay had the first attempt on goal with a header as he came in from the right three minutes in but that did not signal a significant shift for United.

Instead, it was Villarreal who took control with a degree of ease that would have been almost odd to witness had it not been seen before. When Moi Gómez headed towards the area after five minutes, Aaron Wan-Bissaka didn’t just back off, he half-turned and ran away. De Gea made a sharp save, as he would later do from Manu Trigueros, when Yeremi Pino turned Telles inside out on the other side of the area. Pino had hit the side-netting and Pau Torres headed over. All this inside 25 minutes; six shots.

There were other little glimpses of the way this was going across the pitch. A cheer and then laughter when Juan Foyth turned Ronaldo. Raúl Albiol stepping away from Martial. McTominay sliding straight past Moi. All of it done almost slowly.

From deep, Villarreal played out, Rulli, the central defenders and the midfielders sometimes standing there inviting United to press them. Which some of the time they did – reluctantly, uncertainly and badly, allowing the yellow shirts to step through into the space beyond.

This is what a plan a looks like – how United could do with a player like Dani Parejo or Capoue – and yet it didn’t bear fruit and United were finding a way into this. A sharp Sancho cross after half an hour served as a reminder they were here, an example to follow.

In the next minute, Ronaldo leapt vertically to head goalwards. And then there was a free kick he hit straight into the wall. This was a game now, Sancho up and running, although Wan-Bissaka then gifted the ball to Moi to walk through at ease just before half-time and find Danjuma, who sliced wide.
The Fiver: sign up and get our daily football email.

No one seemed to be in much of hurry when the second half started, although Villarreal were making steady progress on the left where Danjuma was willing to drop to the wing. Another move that began with an incisive ball out of the back, cutting through what little line of resistance there was, ended with Moi’s defected shot finding Trigueros. He guided the ball goalwards but was denied by a superb save from De Gea. Soon after that, they cut through again, this time from the other side. Danjuma, given a site of goal, bent over the bar.

Villarreal showed little urgency, seemingly satisfied to pass and wait, which comes with its own risks United would soon reveal. With Fernandes now on, there was some intent in their game and they should have taken the lead with 20 minutes to go when a superb exchange between him Sancho released the England winger to dash into the area. From six yards, Rulli saved a shot but Sancho will feel he should have scored.

This was United’s time and they started to take the ball, led by Fernandes and Rashford and made good by the usual suspect. 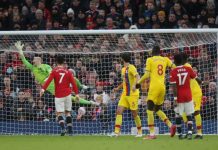 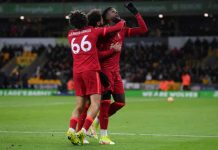 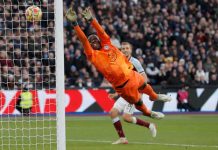