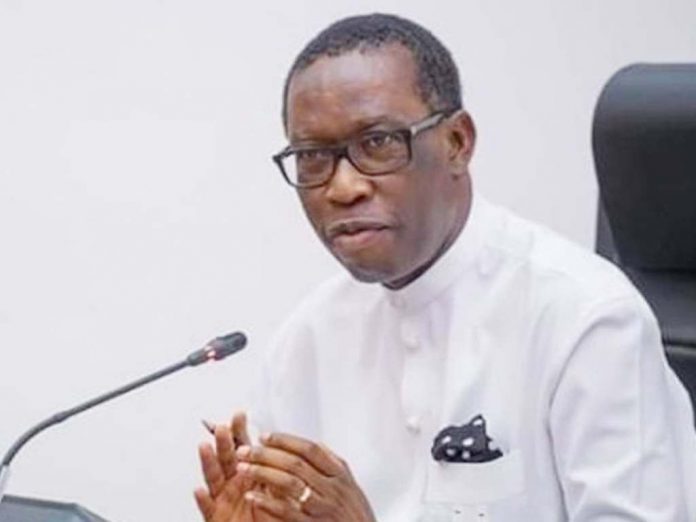 Gov. Ifeanyi Okowa of Delta has called on the Federal Government and relevant policy makers to initiate steps towards reducing the rising cost of Liquefied Petroleum Gas (LPG) in the country.
The governor made the call at a two-day LPG sensitisation and awareness campaign organised by the National LPG Expansion Implementation Plan, Office of the Vice President in conjunction with the State Government on Monday in Asaba.
He said that the theme of the campaign “Stimulating Delta State Socioeconomic Growth Through LPG Adoption And Expansion” was apt as the world moved towards greener sources of energy.
This, according to him, is because of the adverse effects of fossil fuel on the environment.
Okowa, represented by his Chief Economic Adviser, Dr Kingsley Emu, said stakeholders must work to reduce the rising cost of LPG if the objective of the National LPG Expansion plan was to be realised.
He thanked the Office of the Vice President for choosing Delta as one of the pilot states for the public enlightenment campaign.
“Just recently, world leaders gathered in Glasgow, Ireland, in a Summit (COP-26) to discuss the adverse effects of climate change occasioned by the use of fossil fuels and the need to move towards cleaner energy.
“This makes the adoption of LPG as a transition fuel to greener sources exigent, and Delta State is keen to play a vital role in this process and will give this awareness programme maximum support,” he said.
Okowa said that Delta was home to 40 per cent of the nation’s natural gas endowments, hence a large number of oil and gas companies operate in the state.
He said that there were prospects for the establishment of gas processing plants and gas-related industries in the state.
This, the governor said, had implications for employment generation, inclusive economic growth and sustainable development.
“However, as we adopt LPG as the fuel to drive the socio-economic activities of the economy, we must acknowledge a big challenge currently confronting the populace, the issue of high price of LPG in the market.
“At the rate the price is skyrocketing, LPG is gradually getting out of the reach of the middle class and common man.
“The price increase has been linked to several factors including the VAT re-introduction, devaluation of the naira and large importation of LPG vis-a-vis low production locally.
“It is imperative that policy makers find a way to mitigate this upward trend in the price of LPG to give succour to our people, and if the goal of the LPG expansion plan is to be realised,” he said.
Okowa was unhappy with the continuous flaring of gas by most oil and gas companies and urged them to expand their production facility to include the capacity to convert gas to LPG for use.
He said that this was because of the untapped potential in the LPG market.
The governor called on investors to come into the oil and gas sector and improve the availability of LPG in the market.
He that his administration had carried out significant reforms to create investor-friendly climate in the state, including tax harmonisation, easy access to land and dispute resolution mechanisms to handle conflicts when they arise.
“As we embrace the use of LPG in every sector of our economy as the source of energy, safety concerns become paramount.
“We cannot forget in a hurry the gas explosion incident at Agbor in January this year, which, sadly, claimed many lives.
“As a government, we have put mechanisms in place to avert similar occurrences and that includes the setting up of a committee to advise the government on guidelines for the establishment of gas plants in the state,” the governor said.
The Senior Special Assistant to the President on LPG, Mr Dayo Adesina, said Delta State was strategic to the National LPG Expansion plan in view of its contributions to oil and gas development in the country.
He said the Federal Government would procure 10 million gas cylinders and give to marketers for onward distribution to end users which would be exchanged from various homes.
Adesina said there was no reason why anyone should use firewood, kerosene and charcoal for cooking especially when the country was blessed with abundance of gas.
He commended Gov. Ifeanyi Okowa for setting up four training centres for manufacturing of low emission stove in the state.
Earlier in a welcome address, the State Commissioner for Oil and Gas, Prince Emmanuel Amgbaduba, said the objective of the sensitisation was to display the economic and sustainability plan for adopting LPG for domestic use, power generation, agriculture and transportation amongst others.
He said that the adoption of LPG for clean cooking would mitigate against deforestation, reduce depletion of the ozone layer and boost revenue generation in the state.
The commissioner commended Okowa for approving an Annual Sensitisation Campaign on Safety for LPG Retailers in the State, with the maiden edition held in 2020.
“By this new vista, oil companies are encouraged to diversify by transforming waste to wealth in place of flaring gas.
“As the State gets set to embrace the new frontiers that this programme intends to unveil, government is not unmindful of the associated safety hazards especially when not handled appropriately.
“With the establishment of Department of Monitoring and Compliance in the ministry, all hands must be on deck to institute best global practices at keeping every resident of the State safe as we reiterate our resolve to adopt LPG as a transition fuel in the journey towards greener energy,” Amgbaduba said.
On his part, Chairman, Isoko South Local Government Council, Mr Victor Asasa, called for the establishment of gas turbine power plant in Irri to be powered from the gas being flared in the area.
The event featured paper presentations from stakeholders in the oil and gas sector as well as exhibition of locally produced low emission stoves. (NAN).