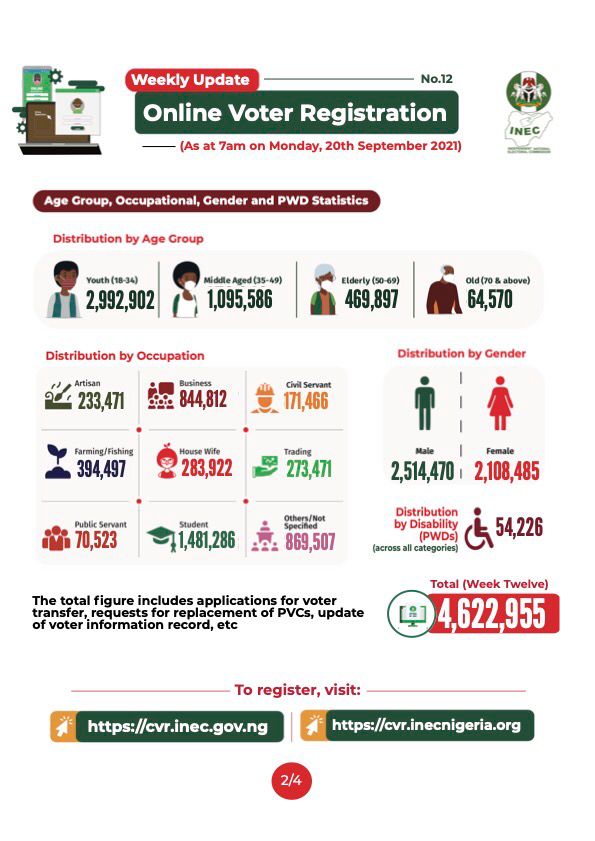 The Independent National Electoral Commission (INEC) says it will on Friday display the details of the newly registered voters in the ongoing nationwide Continuous Voter Registration (CVR).

The commission disclosed this in a statement by its National Commissioner and Chairman, Information and Voter Education Committee, Mr Festus Okoye, in Abuja on Monday.

Okoye said that the first quarter of the exercise would end on Tuesday, as fresh registration hits three million.

He recalled that when the commission resumed the CVR on June 28, INEC released a detailed timetable indicating quarterly schedules for the exercise.

Okoye said that since then, INEC had been giving weekly updates of both the online pre-registration and the physical completion of registration by voters.

“Today marks the 12th week and the cumulative figures for the CVR exercise from inception show that the number of fresh online pre-registrants stands at 3,165,189 .

“Also 1,457,766 Nigerians have applied for voter transfer, replacement of PVCs and update of their voter information records.

Okoye stated that detailed figures for Week 12 as of 7 a.m. on Monday had been uploaded to the commission’s website and social media platforms for public information.

He said that Section 19 (1) of the Electoral Act 2010 (as amended), mandated INEC to publish the register of voters.

He said that the section mandated that it must be published for a period of not less than five days and not more than 14 days for public scrutiny during which citizens may make claims and objections.

“In compliance with the law, the register of new voters will be displayed in the local government offices of the commission nationwide from Sept. 24 to Sept. 30.

“The aim is to enable citizens to assist the commission by identifying ineligible registrants on the list ahead of the cleaning up of the register before adding the fresh registrants to the current register and the printing of their Permanent Voters’ Cards (PVCs) for future elections.

“For clarity, ineligible registrants include foreigners and Nigerians below the age of 18.”

Okoye urged Nigerians to assist INEC to identify multiple registrants and deceased persons so that they can be removed from the register.

“The Commission appeals to Nigerians for sustained cooperation and support in our determination to conduct free and fair elections of which a credible register of voters is the foundation,” he said.

The national commissioner stated that the second quarter of the exercise would begin on Oct. 4 and end on Dec. 20.

According to him, further details will be announced by the Commission before the commencement of the exercise.(NAN) 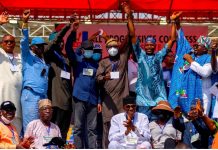