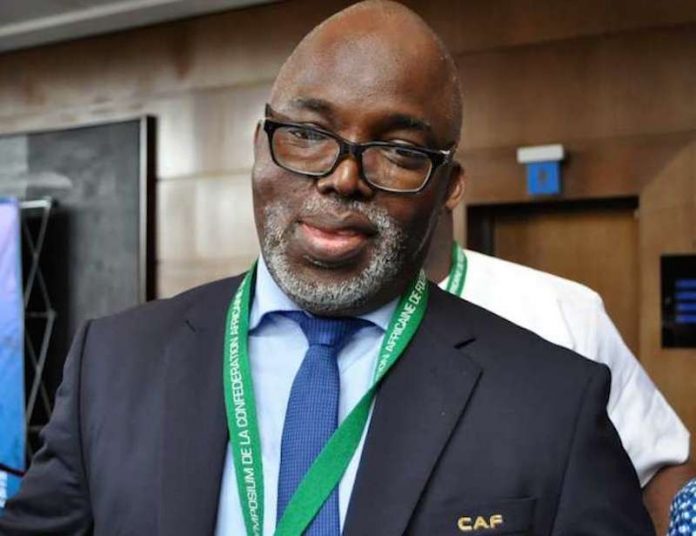 President Muhamamdu Buhari says membership of the Nigeria Football Federation (NFF) President Amaju Pinnick into the FIFA Council will provide benefits that will lead to the advancement of football in Africa.

The president stated this on Friday in Abuja, when he had an audience with the Minister of Youth and Sports Development, Mr Sunday Dare and Pinnick, at the State House.

He, once again, congratulated the NFF boss on his election victory into the strategic body that sets the vision for global football, assuring him of Nigeria’s support in his new position.

“The position on the Council of the world’s football governing body, FIFA, comes at a time when Nigeria is determined to turn the fortunes of her sports development around through better infrastructure, more investment both public and private government incentives.

“Without prejudice to the continental nature of your assignment at the Council, I urge you to use your position to ensure Nigeria’s sporting image receives a boost.

“I know this position will assist Nigeria get technical and financial support from FIFA; and your position should create a platform for other Nigerians to enter into the FIFA family and other international Sports Federations,’’ he said.

While emphasising his belief in the potential of sports to promote peace, unity, enhance good health and stimulate the economy, Buhari said: ‘‘One of the greatest sports is football and Nigeria is a great football nation.

”I am myself a keen follower of football.’’

On his vision for Nigerian football, the President told the minister and the NFF President:

‘‘I want to see Nigeria’s football develop and move in a more dynamic trajectory from football administration to youth and grassroots football, talent hunt and use of Nigeria’s home based talents.

‘‘Nigeria also needs a more privatized and better organised football regime that can rival others in Europe and America,’’ he said.

The president, therefore, urged the NFF to work with the Sport ministry and football stakeholders to provide Nigeria with a 10-year Football Master Plan that would ensure youth football development, in line with FIFA’s commitment.

He urged corporate organisations to invest in sports development, and pledged his administration’s commitment to turn sports into business.

He added that the expected reviewed Sport Industry Policy ‘‘will be the catalyst that turns football activities associated with it into key contributors to the national economy.’’

In his remarks, Dare thanked the President for his support for sports development in the country, and for approving the reclassification of sports as business, instead of mere recreation.

He promised that a new draft policy on the sports industry was almost ready, as well as a 10-year master plan for football at all levels.

The new FIFA Council member, Pinnick, equally lauded President Buhari for his support for football, saying: ‘‘without you, I couldn’t have won election into the FIFA Council. Your name is highly respected across the continent.’’

Pinnick pledged to be a worthy Ambassador of the country, adding ‘‘I will use the office to build Nigerian football, in conjunction with the Ministry of Youth and Sports Development.’’

He was on March 12, elected into the FIFA Council after a landslide victory, defeating Malawian FA President Walter Nyamilandu by 43 votes to eight at the CAF General Assembly held in Rabat, Morocco.