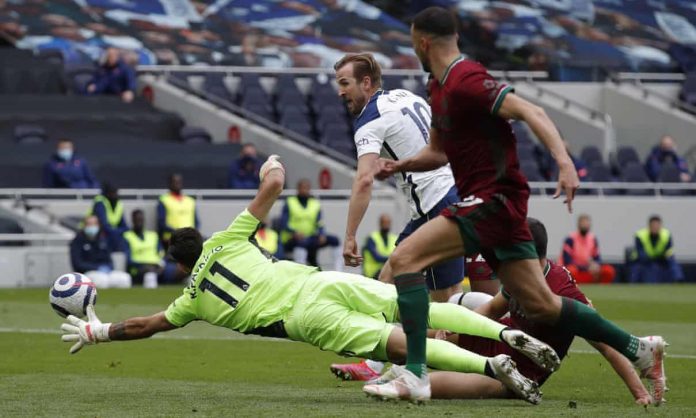 Harry Kane and Pierre-Emile Hojbjerg on Sunday both scored a goal each as Tottenham produced a confident performance to beat Wolves and move up into sixth in the race for Europa League football.

Kane scored his 22nd English Premier League goal of the season before Hojbjerg grabbed Tottenham’s second just past the hour to seal a victory which lifted Ryan Mason’s team to sixth in the standings.

Kane, the league’s leading scorer, struck on the stroke of halftime, shortly after seeing Conor Coady block his header on the goal-line with the England defender then also clearing a goalbound follow-up shot from Giovani Lo Celso.

Hojbjerg spotted Kane with space in behind and played in the England captain who took the ball into the area and showed composure to hold off Coady and deliver a cool finish past a diving Rui Patricio.

Spurs hit the post twice in a matter of seconds shortly after the break but finally doubled their lead when a low drive from Gareth Bale was parried into the path of Denmark midfielder Hojbjerg who ran into the six-yard box to tap the ball home.

Wolves rarely threatened and Spurs comfortably held on to move to 59 points, within five points of fourth-placed Chelsea with two matches to play.

They are one point behind Liverpool, who are fifth with a game in hand. Wolves remained 12th. (Reuters/NAN)