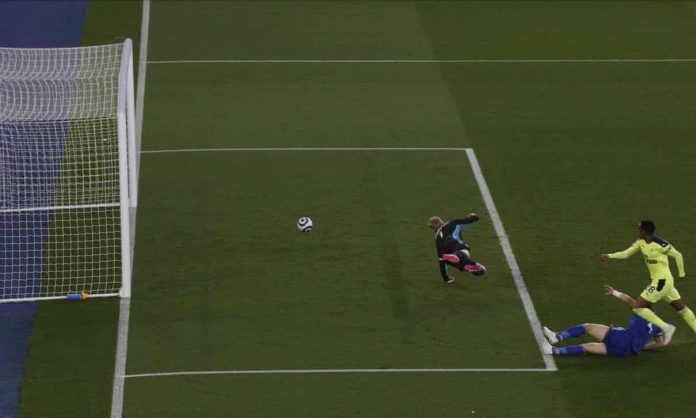 Five years to the day since Andrea Bocelli serenaded Claudio Ranieri’s title winners at the King Power, Leicester hit an almost unbelievable bum note. Being thrashed at home by Newcastle seemed an outlandish prospect before a game that Brendan Rodgers’ side needed to win to edge closer to Champions League qualification.

Late goals by Marc Albrighton and Kelechi Iheanacho brought no consolation to hosts who looked shambolic as Joe Willock and Paul Dummett scored for the visitors before Callum Wilson added two more. Steve Bruce has faced all kinds of criticism this season but one quality he undeniably has is resilience. Leicester’s staying power, on the other hand, is wide open to question again.

Leicester have been in the top four for every match day since September 2019 except one, and nobody in the East Midlands needs reminding that the exception was the final day of last season. Rodgers insists that experience has helped to make his team stronger. Most of their performances this season support that view. But their failure to beat 10-man Southampton last week raised fears that the pressure might start to gnaw at them.

Not that anyone within the club admitted to worries before this match. Leicester projected optimism and their owner, Aiyawatt “Top” Srivaddhanaprabh, was able to fly in from Thailand to watch a match at the King Power for the first time since February 2020. He will remain in England for the rest of the run-in, including next weekend’s FA Cup final, which is sandwiched between league duels with Manchester United and Chelsea. Leicester hoped to drain as much stress as possible from those meetings by dispatching Newcastle.

The first sign that things might not go to that plan came before kick-off, when Jonny Evans injured his foot in the warm-up. Marc Albrighton, that most trusty of utility men, was drafted in at left wing-back while Timothy Castagne shifted to central defence.

The other problem was that Newcastle had not come to act as bystanders. They still need points to be certain of keeping their heads above the relegation waters. When Wilson lured Caglar Soyuncu into fouling him at the edge of the area in the eighth minute, Matt Ritchie’s free-kick triggered panic in the home box. Leicester eventually scrambled the ball clear but Newcastle soon returned to cause more trouble, Federico Fernández flicking a header just wide from another free-kick. Evans’ absence was starting to show.

Only a magnificent save by Kasper Schmeichel prevented Allan Saint-Maximin from firing the visitors into the lead in the 15th minute at the end of a counterattack launched by Jacob Murphy and Wilson, whose pass left the Frenchman with a free shot from eight yards. The goalkeeper could not repeat that exploit five minutes later when Soyuncu miscontrolled the ball outside his own area, allowing Willock to pounce on it and slot expertly into the net from 12 yards.

Dubravka foiled Wesley Fofana’s attempt to plunder an immediate equaliser, batting away the defender’s close-range header. That was a rare threat from the hosts, who were being made to look a tad ragged by Steve Bruce’s increasingly slick team. Newcastle extended their lead thanks to an unlikely scorer, as Dummett outjumped Fofana to head a corner by Ritchie into the net. It was Dummett’s first goal since January 2016. Dubravka again stopped Leicester from hitting back rapidly, parrying a shot by Iheanacho.

The goalkeeper did even better on the stroke of half-time, rushing off his line and jumping high to thwart Vardy’s attempt to lift the bouncing ball over him.

Rodgers’ men emerged much sharper after the interval, forcing Newcastle to defend with iron resolve. Leicester had to toil for their few chances. Maddison had a free-kick deflected just wide in the 54th minute, and Wilfred Ndidi’s header from the resultant corner missed by inches. Then Leicester’s defence fell apart again. Castagne failed to cut out a long pass from the back by Ritchie, merely prodding it into the path of Wilson. The striker made him pay with an immaculate finish.

Leicester’s nightmare was not over. Wilson made it 4-0 by running on to a pass by Miguel Almirón and finishing smartly after his first shot rebounded off a post.