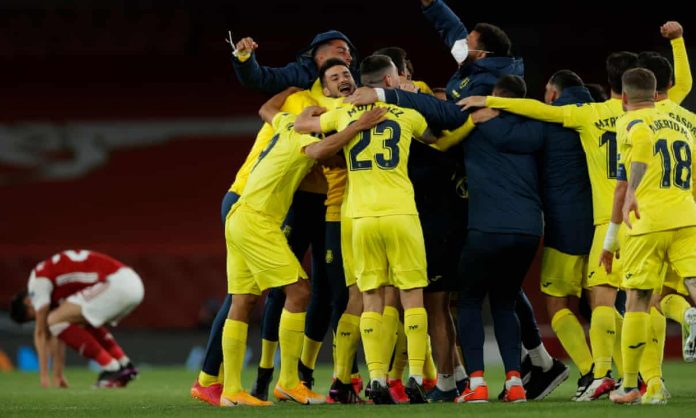 Where do Arsenal go from here? It is easier to say where their travels will not be taking them. They will be confined to England for at least the next year, any realistic hope of European football in 2021-22 having been put beyond them by an astute Villarreal side that held them at arm’s length to deservedly reach the Europa League final.

It is an embarrassment for the club and for Mikel Arteta, who will begin next season with the credit amassed upon his appointment 16 months ago running dangerously low. What a feat of narrative, too, that his predecessor, Unai Emery, inflicted the defeat that may ultimately define his tenure.

Two years ago Emery led an Arsenal side that, on paper, looked no better than this one to the Europa League final with a convincing semi-final win over Valencia. Here it was his Villarreal players who operated with control and clarity for the most part, riding their luck late on when Pierre-Emerick Aubameyang struck an upright but leaving Arsenal to spend the coming months spluttering through clouds of recrimination and self-doubt.

Arteta could not say goodwill had been lacking at the outset. While another protest against the club’s owners did not draw the numbers that massed outside the Emirates a fortnight ago, the couple of hundred who did turn out greeted the team buses with songs and flares as they arrived.

Gone was the ill-conceived strikerless lineup that felt fortunate to escape the first leg with a foothold in the tie; in came a more ambitious, if similarly lesser-spotted, setup that dispensed with one of the deep midfield positions and sought to swarm Villarreal with movement around Aubameyang.

They showed little sign of cohesion early on and it was Villarreal, looking comfortable in their roles under Emery, whose incursions packed greater punch. Samuel Chukwueze had tormented Granit Xhaka a week previously so may have felt disappointed when the stand-in left-back pulled out with a tight muscle in the warm-up. Kieran Tierney stepped in and, while a far superior option, could be excused rustiness after a five-week absence. Within five minutes Chukwueze had checked inside him and, with his left foot, bent a dipping shot that Bernd Leno flipped over the bar at full stretch. He demanded a block from Tierney shortly afterwards and Arsenal, although pressing keenly and dominating territory, were struggling to make inroads.

There was an anxiousness to their play, evidenced when Thomas Partey launched a hideously overhit back pass that forced Leno to stretch and head away. Partey then conceded a cheap free-kick from which Dani Parejo skimmed the roof of the net and it was clear already that, as ever, Emery would be giving nothing away easily in this competition.

It took 26 minutes for Arsenal to come close and, in fairness to Aubameyang, it was an excellent strike that almost sent their spirits rocketing. His angled volley, after a loose Parejo clearance, fizzed past Gerónimo Rulli but clipped the far post. Four minutes later they might have sensed the tide turning as the unfortunate Chukwueze, comfortably the visitors’ biggest threat, went down in obvious pain off the ball and departed on a stretcher with head buried in hands.

Villarreal appeared relatively unflustered but were fortunate when Rulli, who had flapped at two earlier punches, fumbled a straightforward drive from Aubameyang and was relieved to gather near the line. At the other end Pablo Marí came close to diverting Gerard Moreno’s pass beyond Leno and Arsenal, who know no other way, were living on the edge.

A minute into the second half they could have hit the right side of the margins but Nicolas Pépé, found by Tierney’s scooped pass, drilled wide.

Then Emile Smith Rowe, offered their best chance so far after Rulli had again struggled under a cross, set himself but floated his shot off target from 10 yards. The tempo and tension had ratcheted up, both managers noticeably more exercised on the side as the game swung back and forth. Emery bounced on his heels in frustration after another Partey error allowed Moreno to work a promising position before shooting tamely at Leno.

A two-goal deficit would have been too much for Arsenal. Time was running out to score just once and their momentum slowed after a stoppage to treat an injury to Marí. Arteta summoned Gabriel Martinelli before the three-quarter mark, surely aware by now that salvation would require a bolt from the blue.

It so nearly came, Rob Holding flicking a header just wide before Aubameyang nodded Bellerín’s cross against the inside of Rulli’s right post. But the goal they needed proved elusive despite five frantic added minutes and now the post-mortem will begin.