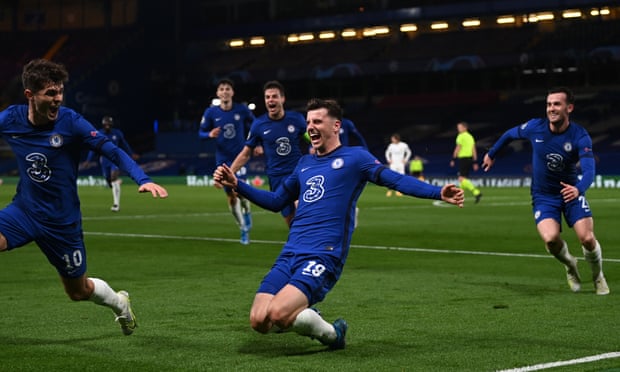 Up until the 85th minute, the fear had nagged away at Chelsea. It was not based on anything much that Real Madrid had shown on the field across the two legs of this Champions League semi-final – apart from perhaps the latent menace of Karim Benzema. Rather it took in the aura of the 13-times champions, their reputation as the ultimate survivors. While they had a pulse, a puncher’s chance at the equaliser for 1-1 and extra time, they could not be ruled out.

Chelsea had done everything to add to Timo Werner’s goal midway through the first half except put the ball in the net. If they had enjoyed the better of the first leg in Madrid last Tuesday, this was on another level, particularly in the second half.

Time and again, they saw the whites of Thibaut Courtois’s eyes only to blink. Mason Mount, Kai Havertz and N’Golo Kanté wasted one-on-ones with the goalkeeper, previously of this parish, and there were other openings.

Havertz had sent one of them against the crossbar on 46 minutes. Would Chelsea live to regret their profligacy?

Happily for them, the answer was no. It was not destined to be an occasion when Chelsea let their prey off the hook and it was Mount who finally and deservedly got the goal that made sure of a third appearance in the final for his club. What a final it promises to be against Manchester City, the team they beat in last month’s FA Cup semi-final and travel to face in the Premier League on Saturday.

Mount’s clinching goal owed much to Kanté, as had Werner’s much earlier on; it felt as if a lifetime had passed between the two. Kanté won the ball high up from Nacho and fed the substitute Christian Pulisic, who passed up the opportunity to shoot and, for a moment, appeared to have dwelt too long. Then, he crossed low and Mount, bursting every sinew to get to the ball first, was able to ram it home.

Cue the celebrations. And the relief. Chelsea’s record at this stage of the competition has not been great. Prior to this, they had lost five of seven semi-finals. They could feel the ghosts of Monaco, Liverpool (twice), Barcelona and Atlético Madrid. Had they fallen short again, particularly after the way that they played, it would have been the worst of the lot.

Instead, the Thomas Tuchel-driven revival goes on, this the latest and arguably the most impressive big-game statement. The manager knew that a clean sheet would suffice and he is certainly aware of how to get them. It would be the 18th that he has overseen in 24 matches in all competitions at Chelsea.

But Tuchel did not want to merely keep the back door bolted; the idea was to carry the fight, to ask questions of a Real defence that featured the return of the captain, Sergio Ramos. How they did so and Tuchel, who lost last season’s final with Paris Saint-Germain to Bayern Munich, can now sense a glorious ending to the current campaign. A top-four league finish is within his grasp while his team will start the FA Cup final against Leicester as favourites.

Zinedine Zidane had ditched his 3-5-2 system from the first leg and gone with a more typical 4-3-3. Luka Modric roamed high, looking more like a No 10 at times and, as Eden Hazard drifted all over from the left, Ferland Mendy pushed up from left-back. Yet there were very few points when Madrid managed to get in behind Chelsea’s last line.

Benzema did so once on 35 minutes, running on to Modric’s cross only for Édouard Mendy to tip over his header. The striker – and Real – could reflect on just one other opening, which followed a Modric-inspired build-up in the 26th minute. Benzema took a touch on the edge of the area and unloaded for the bottom corner. Mendy got down smartly to tip away.

Chelsea had made early inroads up the left through Mount, Werner and Ben Chilwell and the breakthrough goal was all about the drive of Kanté and the impudence of Havertz, who more than justified his inclusion ahead of Pulisic.

Kanté spun away from one white shirt and flicked on the afterburners to nip in front of Casemiro. He played a give-and-go with Werner before slipping in Havertz, who was confronted by all 6ft 6in of Courtois. So he went for the chip. It was pitched high – it had to be – and it came back out off the crossbar. Werner nodded in the rebound.

Chelsea made a series of poor final decisions on the ball before the interval, with Werner and Havertz prominent on the guilty list, and the chances came and went in the second half.

Havertz’s towering header from a César Azpilicueta cross beat Courtois only to rattle the woodwork while Thiago Silva headed off target and Mount lifted high after a one-two with Werner. Havertz and then Kanté looked odds-on to finish and yet Courtois blocked.

Enter Mount. At long last, he and his teammates could exhale.