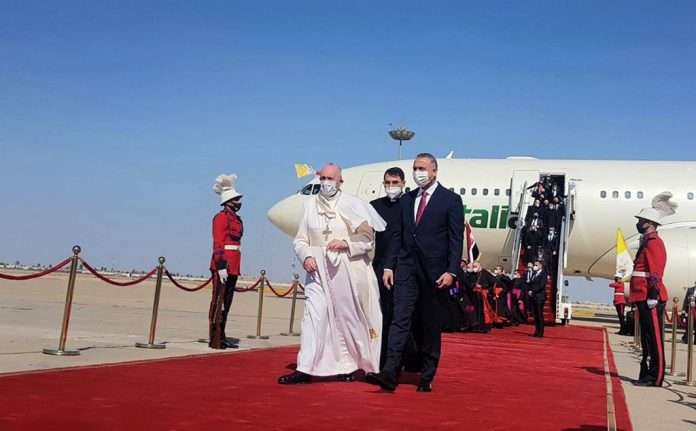 The crises facing Iraq can be overcome by building a society based on fraternal union, solidarity and concord through concrete acts of care and service, especially for the vulnerable and those most in need. After a crisis, what will help us rebuild the world better than what was before is the virtue of fraternal solidarity and coexistence.

Pope Francis made that exhortation on Friday while addressing Iraq’s authorities, the diplomatic corps and representatives of civil society at the presidential palace in the capital, Baghdad.

In the first discourse of his 33rd foreign visit outside Italy, the Holy Father noted that his trip to Iraq was taking place at a time when the world was trying to emerge from the Covid-19 pandemic.

The crisis that has hit not only people’s health but also exacerbated social and economic conditions, he said, calls for a concerted effort to take necessary steps toward recovery. But above all, the crisis summons all to “rethink our styles of life… and the meaning of our existence” (Fratelli tutti, 33). The Pope added we need to come out of it “better than we were before, and with shaping a future based more on what unites us than on what divides us.”

The disastrous effects of wars, the scourge of terrorism, and sectarian conflicts that have plagued Iraq over several decades, the Pope noted, have often been grounded in a fundamentalism incapable of accepting the peaceful coexistence of different ethnic and religious groups, and different ideas and cultures.

This has brought about death, destruction, and ruin, not only materially but has also caused heartbreaks and wounds that will take years to heal. He particularly mentioned the Yazidis, “innocent victims of senseless and brutal atrocities, persecuted and killed for their religion, and whose very identity and survival was put at risk.”

Pope Francis said that only when we learn to look beyond our differences and see each other as members of the same human family will we be able to begin an effective process of rebuilding and leave future generations a better, more just and more humane world.

In this regard, he pointed out that Iraq, with its hallmark of religious, cultural and ethnic diversity, is called to show everyone, especially in the Middle East, that diversity should lead to harmonious cooperation within society, rather than giving rise to conflict.

Fraternal coexistence, continued Pope Francis, calls for patient and honest dialogue, protected by justice and respect for the law, a difficult task that calls for the commitment of all. We need to set aside rivalries and contrapositions and regard one another from our deepest identity as fellow children of the one God and Creator.

After a crisis, the Pope said, we need to rebuild well, so that all can enjoy a dignified life. “We never emerge from a crisis the same as we were; we emerge from it either better or worse.”

However, a society that lives fraternal unity in solidarity with one another, comes out better. Solidarity, he pointed out, is a virtue that leads us to carry out concrete acts of care and service with particular concern for the vulnerable and those most in need, such as those who have lost family members and loved ones, home and livelihood due to violence, persecution or terrorism.

Even government leaders and diplomats are called to foster this spirit of fraternal solidarity. This they can do only by combatting corruption, misuse of power and the disregard for law, but also by promoting justice, fostering honesty and transparency and strengthening institutions in these fields. These efforts will usher in a stable society and healthy politics that will offer “sure hope for a better future,” especially to the young people of Iraq.

Expressing deep sorrow for the untold destruction and cruelty the Iraqis are going through, the Holy Father said he was among them “as a pilgrim of peace in the name of Christ, the Prince of Peace.”  “May the clash of arms be silenced” in Iraq and everywhere, he urged, before making a series of appeals.

He called for the end to partisan interests, and that the voice of builders, peacemakers, the humble, the poor and the ordinary men and women be heard.

“May there be an end to acts of violence and extremism, factions and intolerance! May room be made for all those citizens who seek to cooperate in building up this country through dialogue and through frank, sincere and constructive discussion.”

For this to happen, the Holy Father said, “it is essential to ensure the participation of all political, social and religious groups and to guarantee the fundamental rights of all citizens.”

“May no one be considered a second-class citizen,” he urged.

Role of the international community

Pope Francis also reminded the international community of its duty to promote peace in Iraq and in the Middle East as a whole.

Conflicts, such as in neighbouring Syria, he said, call for cooperation on a global scale in order to address issues, such as the economic inequalities and regional tensions that threaten the stability of these lands.

The Holy Father thanked the countries and international organizations, including Catholic agencies, which are working in Iraq to rebuild, for providing humanitarian assistance to refugees, the internally displaced and those attempting to return home.

The Pope epxressed his hopes that the international community would continue to act in a spirit of shared responsibility with the local authorities, without imposing political or ideological interests.

Religion, by its very nature, he said, must be at the service of peace and fraternity. Hence, the name of God cannot be used “to justify acts of murder, exile, terrorism and oppression.”

The Church in Iraq

The Catholic Church in Iraq, said Pope Francis, desires to cooperate constructively with other religions in serving the cause of peace.

“The age-old presence of Christians in this land, and their contributions to the life of the nation, constitute a rich heritage that they wish to continue to place at the service of all,” he said. “Their participation in public life, as citizens with full rights, freedoms and responsibilities, will testify that a healthy pluralism of religious beliefs, ethnicities and cultures can contribute to the nation’s prosperity and harmony.”