The Joint Action Committee including the Non-Academic Staff Union of Universities and Senior Staff Association of Nigeria Universities, on Wednesday, said the unions might be forced to embark on strike if the Federal Government fails to meet their demands by Thursday.

President of SSANU, Mohammed Ibrahim, stated this while featuring on Channels Television’s Sunrise Daily programme monitored by The PUNCH.

The unions started a three-day nationwide protest on Tuesday over the Integrated Personnel and Payroll Information System and the N40bn earned allowance.

While ASUU President, Prof Biodun Ogunyemi, justified the amount promised lecturers out of the N40bn, non-academic unions have since described the Federal Government’s sharing formula as illogical and a divide and rule tactic.

SSANU and NASU are against the N30bn promised ASUU, saying the sharing formula was 75 per cent (N30bn) for the lecturers and 25 per cent for other unions.

Speaking on Wednesday, Ibrahim said, “The major aim of our protest is to sensitise government that look, you have a problem. The problem is that you are not honouring agreements. From agreements you have moved to MoUs and MoUs are becoming just a charade – you sit down and take tea and the MoUs will never see the light of the day.

“After day 3, we will meet and appraise the situation and let the world know our next line of action. But whenever you see the two unions –NASU and SSANU– meet, any decision we take will be in the best interest of the students and our membership.”

The SSANU president said the option of industrial action cannot be overruled, adding that the government caused the problem at hand.

He said, “In the labour laws, strike is not an abnormal thing. We can also go on strike. But whenever you see us go on strike, it is the last option. We don’t just jump at strike; we are not strike-triggered unions, we go on strike when it becomes inevitable. I will not foreclose that if government does not listen, which I don’t want to believe because engagement have already started, we will go on strike.

“If these monies were given to the university managements, all these hullabaloos would not be there because the right thing will be done. But when you call out a union and say I am giving you this, when have unions become institutions of governance? Unions are supposed to be pressure bodies.” 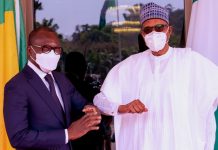