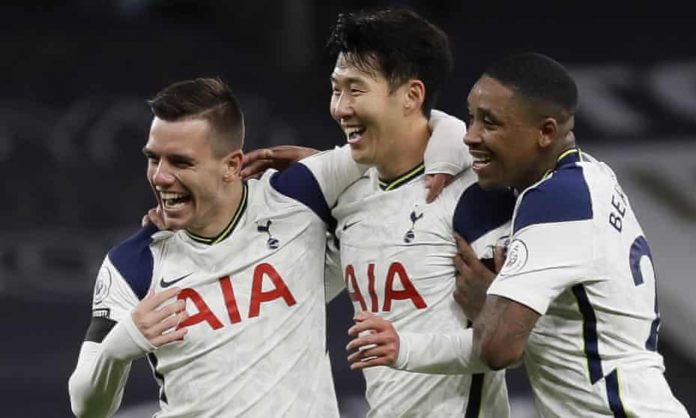 For José Mourinho, this was the definition of a plan coming together. There was the satisfaction of introducing Giovani Lo Celso in the 64th minute and seeing him score Tottenham’s second goal almost immediately, with his first involvement. But it went deeper than that, as Spurs got the result to carry them to the top of the Premier League table.

Lo Celso’s goal was just one part of Mourinho, in the vernacular of his trade, doing a number on Manchester City and his rival and counterpart, Pep Guardiola.

Spurs set up to contain City and they contained them. They set up to punch on the counter and they punched on the counter, with both of the goals coming from quick and direct moves as City committed men ahead of the ball.

Son Heung-min got the opener early on, following Tanguy Ndombele’s ball over the top, and Lo Celso finished after Spurs went from box-to-box through two players. The excellent Toby Alderweireld cleared from the edge of his own area to Harry Kane, who was just behind halfway, and he drove the break before passing to Lo Celso, who had bent a clever run up the inside left channel.

Guardiola’s team looked to play their normal game, hogging possession and carrying the fight to their opponents. But it was all a little flat and predictable and, time and again, they ran aground on Spurs’s defence, in which Eric Dier also impressed. Guardiola had signed a two-year contract extension on Thursday, blowing away a dark cloud, but there was no immediate tonic.

City remain in mid-table with plenty to ponder, not least the question about where the goals have gone. They have scored just 10 in eight league games this season and it is a far cry from their days of running up cricket scores.

Kevin De Bruyne remains their main man but it has come to feel as though there is too much of a dependency on him; that the creative burden, in the absence of David Silva, is too heavy.

City had arrived in London with one of the meanest defences in the league but Spurs went ahead with their first forward thrust and it was all too easy. Ndombele turned sharply in midfield, dropping his shoulder to ease away from Bernardo Silva, and he looked straight away for Son, who had found a large seam of space up the left. City’s centre-halves had been drawn to Kane, who had dropped deep – a feature of the game – and João Cancelo got across too late. Son shot through Ederson’s legs for his ninth league goal of the season and eleventh overall.

Spurs almost scored again on 13 minutes after a break featuring the nonstop Steven Bergwijn, who played ahead of Gareth Bale, and Son. Kane turned Son’s cross into an empty net but he had strayed offside. The pattern, though, was set – City pushing high and probing; Spurs digging in and biding their time.

City had their moments in the first half and they thought they had equalised in the 27th minute only for VAR to spot a handball by Gabriel Jesus before he laid off a Riyad Mahrez cross to Aymeric Laporte, who lashed past Hugo Lloris. City would protest in numbers to the referee, Mike Dean. The decision was right but it seemed to rattle them.

Spurs’s defensive mettle was tested and they had the answers. Alderweireld, who would be forced off towards the end with a serious muscle injury, made an impeccably timed challenge to halt Jesus while Moussa Sissoko got back to thwart Ferran Torres on another occasion in the first half.

Rodri also headed straight at Lloris from a De Bruyne free-kick – a big chance wasted. At the other end, Rodri tracked back on 26 minutes to dispossess Bergwijn after Kane had led a counter, which featured an overlap by Pierre-Emile Højbjerg. The defensive midfielder was one of Spurs’s stars, bringing tenacity and balance to the team.

De Bruyne got himself into good areas on three occasions in the first 15 minutes of the second half only to flash one shot side and see the other two blocked by Dier.

Spurs maintained their threat on the break, with Son’s touch too heavy from a Kane pass on 63 minutes after Ederson had left his line. City knew all about Mourinho’s tactic of dropping Kane back in order to create spaces for the wide forwards, to pick them out himself at times, but they were still hurt by it. Kane made the difference and, when he set up Lo Celso, City were broken.

Guardiola got Raheem Sterling on as a substitute but not Sergio Agüero and his team’s frustrations were summed up at the end when Lloris saved at point-blank range from Rúben Dias.

One year after his appointment, Mourinho has Spurs where he wants them. He will travel to Chelsea next Sunday with optimism. 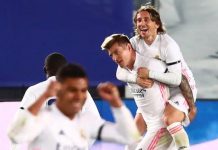 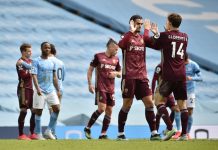 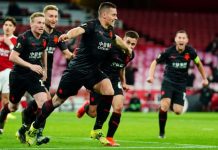