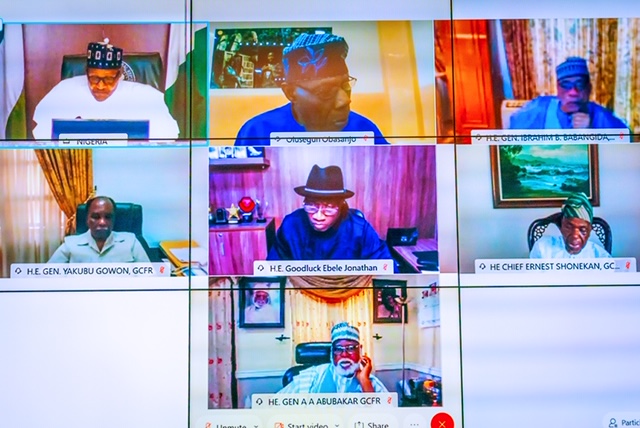 Special Adviser to President Muhammadu Buhari on Media and Publicity, Femi Adesina, said the meeting between Buhari and former heads of state on Friday, October 23, was “very touching, poignant”.

He said they discussed issues surrounding the #EndSARS protests and the state of the nation.

Adesina made this known in an article titled ‘#EndSARS: Inside PMB’s parley with former heads of state,’ on Friday.

The PUNCH reports that the meeting held about two weeks after youths in the country began a protest against police brutality, extrajudicial killings, and extortion in the country.

The protests were suspended in many parts of the country after soldiers shot some of the #EndSARS protesters at the Lekki toll plaza on October 20.

Adesina narrated that Gowon gave the opening remarks by lamenting that what had started peacefully was taken over by “organised miscreants in Lagos and other parts of the country. Peace and genuine protests by youths have been hijacked.”

Drawing from experiences in 1967, before the Nigerian Civil War, Gowon was said to have also given some recipes for the government to consider.

The presidential aide said Obasanjo spoke next amidst fears that he might antagonise the Buhari regime.

Obasanjo was quoted as saying, “Let me commend your speech of last night, which the nation had been waiting for. You made points that I believe need to be commended.

“You said peaceful protests were part of democratic practice. You also indicated that the demands of the genuine protesters had been accepted, and you were working on implementation.”

The former President said the activities of hoodlums who hijacked the protests should be condemned, “as they took away the protests from those who initially planned them.”

On the job and economic situation in the country, he said, “We need heavy local and international investments to make the impact we need to make. Our Foreign Direct Investment is inadequate. And we need to get better results in security so that the investments can come.”

When it was the turn of Ibrahim Babangida, he expressed concern about the quality of intelligence available to the security agencies.

Abubakar also talked about the need for synergy among the security agencies, whom he said should avoid “multiple mandates.”

“With adequate intelligence, some of these things can be nipped in the bud. “I commend the government for the efforts so far, to end the protests. Funding of security agencies should also be looked into, while the media should be adequately engaged,” he was quoted as saying.

Shonekan cautioned that “preventive actions should be considered for the future, rather than curative”.

“Please, call us for more of these meetings. We need to frequently discuss very important national issues,” he added.

Jonathan was said to have commended the broadcast of the previous night, and asked questions: “what led to the crisis? How do we stop such in the future, even after the Buhari administration?”

He said, “the root cause of the crisis had been with us far before the advent of the current administration”, and that “it may last into future governments, except some immediate steps were taken.”.