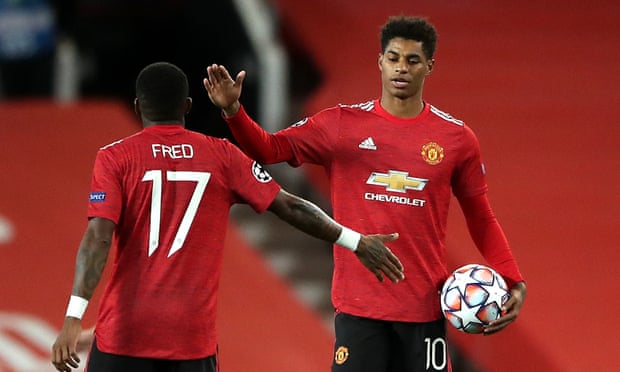 This was the best Ole Gunnar Solskjaer’s side have performed yet, a display that while no way perfect augurs well. When Bruno Fernandes slipped Marcus Rashford in on 75 minutes the forward beat Peter Gulasci, Leipzig’s No 1, with ease. The assistant referee flagged yet VAR showed Rashford was not over halfway and onside, and the goal was reinstated. That these two players had started on the bench was illustrative of the depth of quality of Solskjaer’s squad – Rashford then killing the visitors off with as convincing a third moments later before Anthony Martial’s late penalty – and there was time for Rashford to clinch a hat-trick.

Solskjaer gave Donny van de Beek a first start in the competition, having yet to do so in the Premier League. Paul Pogba was recalled after three games on the bench, while Mason Greenwood was named in the team for the second time this term. RB Leipzig arrived as unbeaten Bundesliga leaders so would offer the latest litmus test of Solskjaer’s side. An intriguing element here was how they would fare without Fernandes, the best player rested for a match of major import for the first time since joining in January, along with Marcus Rashford, last week’s matchwinner at Paris Saint-Germain. Van de Beek lined up at the tip of a midfield diamond behind Greenwood and Anthony Martial and it was Fred who had the opening shot. Luke Shaw swung a free-kick into Leipzig’s area, Harry Maguire headed down, and when the ball broke to Fred he blazed at Peter Gulacsi, the goalkeeper having his fingers warmed.

United were intent on a muscular pressing tactic that had Anthony Martial harrying Dayot Upamecano when the middle of the three centre-backs deployed by Julian Nagelsmann tried to initiate play. It was the Frenchman’s break down the right that had Leipzig scrambling but when Martial tried to find the on-rushing Greenwood the pass was behind him and the Germans recovered. The tempo was high: Leipzig moved the ball slickly upfield in a sequence that ended with Emil Forsberg shooting and Aaron Wan-Bissaka hoofing clear. The sense, though, was of each team thundering at the other while lacking poise.

Upamecano hit a pass straight to Fred who in aiming for Van de Beek found only the opposition. Nemanja Matic received on halfway, spun, and chipped towards Greenwood but once more the radar was off. The latter was about to show ultimate precision. Pogba made the teenager’s opener with a surge that had Leipzig back-pedalling and a slide-rule pass which met the sweetly-timed run of Greenwood, whose supreme angled finish beat Gulacsi. He appeared marginally offside but VAR ruled otherwise and the goal stood. Here was the latest evidence of Greenwood’s undoubted class. Yet from a corner at the other end United’s shaky defence was also on show when Victor Lindelof failed to challenge Upamecano, the ball went towards Marcel Halstenberg, and Matic saved his team. In Christoper Nkuku, Shaw had an opponent along his left-back corridor who was constantly driving at him as when Ibrahima Konate fed the No 18. And in Leipzig, United had a team who had camped in their territory since their opener.

Still, they had the lead as the second half kicked off. And had impressed. The question now was whether they could show smart game management – and the early signs were not encouraging as Shaw, Maguire and Van de Beek were all loose when distributing. Shaw, though, was sharper when timing a tackle on Benjamin Henrichs in the area, and this presaged a period of United pressure in which Greenwood unloaded a right-footed shot that Gulacsi beat away – this chance again a product of Pogba, who this time hassled Upamecano into a mistake.

When they attacked Leipzig were certainly targeting Shaw’s flank as Nkunku, Heinrichs and Halstenberg looked for combinations to unlock the home rearguard in this area. Heinrichs also appeared lucky not to be booked for a stamp on Pogba that felled the midfielder, Maguire inquiring of Matej Jug, the referee, why he had not located his yellow card. Martial had been quiet but now a familiar surge from the left had him ghosting into the area and just failing to tee up Van de Beek. On 63 minutes Solskjaer introduced Scott McTominay and Marcus Rashford for Matic and Greenwood, the manager plumping for fresh legs, then seeing David De Gea make a fine close-range save from Konate.

Now, though, came United’s grandstand finish as Rashford sealed a remarkable hat-trick off the bench: they are beginning to hit high gear. 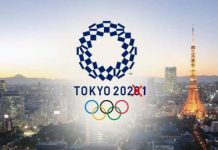 18 Percent Of Olympic Tickets Sold In Japan To Be Refunded 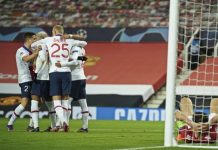