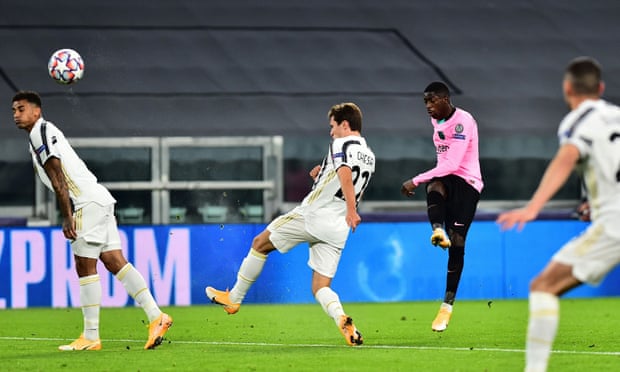 Ousmane Dembélé’s early goal and Lionel Messi’s late penalty were good enough to see off Juventus. Dembélé’s strike may have been blessed by the hand of fortune, but it came courtesy of a delightful Lionel Messi assist and was backed up by an assured and dominant Barcelona performance.

Juventus went down to their first defeat under their new manager, Andrea Pirlo, but for all the flaws and naivete they displayed here they can still take encouragement from the way they scrapped, defended and occasionally threatened in the absence of Cristiano Ronaldo.

Bartomeu’s mic drop and another injury for Liverpool – Football Weekly
Ronaldo’s absence, confirmed by his third positive Covid-19 test on Tuesday, drained a little of the fixture’s star wattage but certainly none of its intrigue.

Barcelona were particularly effective in transition, with Antoine Griezmann smashing the post inside two minutes and Dembélé’s early goal – a hopeful deflected shot that plopped over Wojciech Szczesny’s head in a slow-motion comic arc – springing from a glorious Messi long ball.

Certainly Ronald Koeman will have been impressed with the immediate reaction to Barcelona’s 3-1 defeat in the clásico on Saturday. Off the pitch, Barcelona remain an utter shambles, with the resignation of their president, Josep Maria Bartomeu, only adding to the sense of palace farce currently engulfing Camp Nou. But it is to Koeman’s partial credit that on the pitch, they are still only an occasional shambles.

For all the waste and ruin, there is still so much to like about this team. Take Pedri, the fearless 17-year-old attacking midfielder casually handed his first Champions League start in the front four and owning the occasion entirely. Frenkie de Jong in midfield is a delight. Then you have Messi, who even in this sulking, post-imperial phase of his career retains a basic animal magnetism, the omnipotent threat of creation.

Pirlo, for his part, has always held something of a candle for Barcelona In the thesis he wrote for his Uefa Pro License course last year, he named Johan Cruyff, Pep Guardiola and Louis van Gaal among his major coaching influences. In his autobiography, he recalls fiercely contested Barcelona v Barcelona games on Fifa with his team-mate Alessandro Nesta, a fellow Guardiola fanboy, and even in these tentative early weeks at Juventus, you can see the Barcelona influence in his tactics: the 2-3-5 in attack, the quick rotations and interchanges, the stubbornly high press.

What they still need is time. Or, more accurately: timing. Here you would often see them trying to cut Barcelona open with one pass, or committing two men to the same ball, or making the run just a fraction too soon. The luckless Alvaro Morata had three goals ruled out for offside.

These are the habits of a team still learning on the job, still searching for the rhythm and coordination that will give their relentless energy some meaningful shape.

But they defended well in the second half, as Barcelona began to turn the screw and dominate the ball. Messi missed two good chances. Griezmann squandered a couple of decent opportunities. Substitute Ansu Fati tried to dance the ball in himself.

A more clinical Barcelona, you feel, could well have been out of sight long before Merih Derimal’s second yellow card and Messi’s penalty effectively ended the contest.

Did this game change anything? Maybe not. Messi may have wanted Bartomeu gone, but he also wants a competitive squad capable of challenging for the Champions League and playing the sort of football he craves. Koeman knows his days may yet be numbered if Victor Font wins the next election and brings in his favoured coach Xavi. For both, these wider issues remain unresolved. But perhaps this was a night to remind us that at the very core, there is still a Barcelona worth saving. 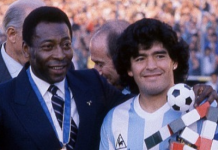 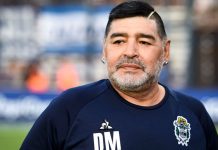 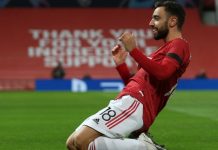