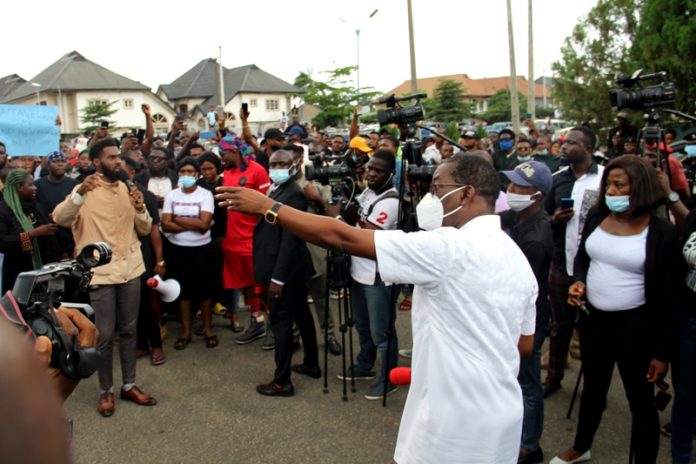 Delta Governor, Sen. (Dr) Ifeanyi Okowa, on Tuesday said ongoing nationwide protests for an end to police brutality in the country was a reflection of leadership and family failures over the years.

Okowa stated this while addressing the protesters at Government House, Asaba, and said that there wouldn’t have been need for the protests if leaders were accountable to the people.

He told the protesters that as youths of the nation, they had every right to organise themselves to protest against societal ills.

The governor announced the constitution of a five-member Police Complaints Committee, with two representatives of the youths as members.

He commended the youths for conducting the protest peacefully and acknowledged that some of the issues raised by the protesters were germane and would be addressed.

“I want to appreciate all of you for ensuring that you are conducting a very peaceful protest; there can be nothing better than peace and that gives me a lot of feeling that our youths can be better organised.

“I am glad that you have gathered yourself nationwide to protest this injustice as regards police brutality.

“I know that through the social media we are able to organise ourselves, but I can see a lot of maturity in your organisation and I must commend you for that.

“On our part as leaders we acknowledge the gap and that we have failed even as parents. In my own home, when my children spoke concerning this protest, I realised that they were as pained as you and that is the same pain that every Nigerian youth is going through,’’ Okowa said.

He added that “as leaders, this protest has also brought to the fore that we have failed ourselves.

“Your voices have been heard loud and clear; SARS has been banned but I assure you that we are not keeping quiet.

“When I commended the IGP for disbanding SARS, I did acknowledge that it was not enough; there is a need for further reform and re-orientation of the entire Police Force.

“The issues of adequate remuneration, training and discipline of the Police Force must be looked into critically in the reform process.

“It is about reformation of the entire police and it is about ensuring that our nation is peaceful.

“We do realise that the police have a role to play in ensuring democratic governance, but they must be played in such a manner that is in favour of civil defence.

“Unfortunately, some of them have put the name of the police in bad light.’’

The governor pleaded with the protesters to remain peaceful and calm while governments at all levels engaged with the police authorities and other stakeholders to meet their demands.

“I plead that you organise yourselves better in the best interest of our nation, Nigeria, where youths will be able to go out without being harassed or exploited by security agencies.

“I appeal to you to counsel others to remain peaceful and be law-abiding as you go about your daily activities.

“Having made your voices heard and having made our elders realise that we have failed as leaders, please give us some time to work things out with key stakeholders,” the governor further said.

Earlier, Spokesman of the protesters, Mr Emmanuel Udezua, had said that youths across the nation were “in pains’’ over brutality of policemen on them, and urged the governor to use his good office to prevail on all stakeholders to end the excesses of police personnel.

“On behalf of the youths of Delta we have come to express our anger and grievances at the incessant molestation of youths by the police nationwide.

“We want a better Delta and a better Nigeria where youths can go about their normal activities without the brutality of the police.

“Stop the exploitation and the oppression of youths. Use your power everywhere you can to end this for us, sir,” he said.