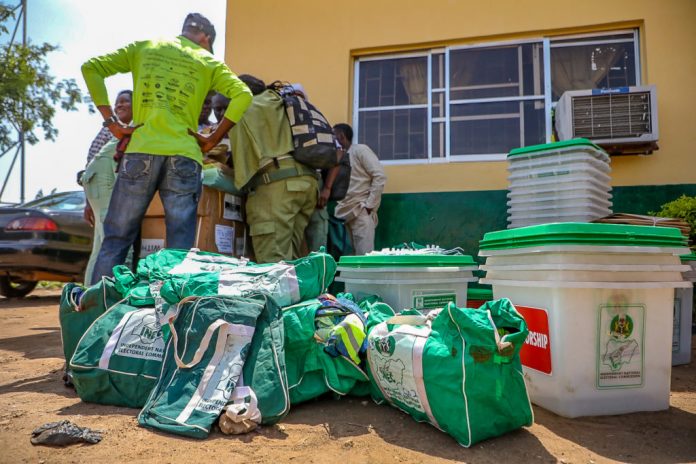 Ondo voters on Saturday commended both the early start of voting and peaceful atmosphere as voting got underway in the state’s governorship election.
Such scenario was seen at polling units in Iju, Akure North Local Government Area of Ondo State, the News Agency of Nigeria (NAN) reports.
Speaking to NAN after casting his vote at Ward 3, Unit 1, Oba Amos Farukanmi, the Okiti of Iju, commended the arrangement and orderliness put in place by the Independent National Electoral Commission ( INEC) for the poll.
Oba Farukanmi, who said that the exercise was organised better than the previous elections, called on his subjects with permanent voter cards ( PVCNANs) to come out en masse and cast their votes for the betterment of the state.
NAN reports that voting started in the polling station at 8:30am.
Also, Mrs Dorcas Faloye, a septugenarian, explained that she had cast her vote for positive change so that the aged would not suffer.
“It is for good of Ondo State so that there will be peace and food supply in order to care for the aged,” she said.
The Presiding Officer in the unit, Busayo Adu, said that the card reader was working perfectly well but decried non-compliance to COVID-19 protocols, especially spacing guideline, by the electorate.
“The people are difficult to control. We have been forcing them to use hand sanitiser and nose cover, but to space them has been a big challenge,” she said.
Similarly, Miss Oluwafunke Akinsola, the Presiding Officer at Polling Unit 7, Ward 8, stated that the card reader was functioning well.
Akinsola noted that non-compliance to COVID-19 spacing guideline was due to the sudden rainfall which seemed to have caused disorderliness.
After casting her vote in the unit, an octogenarian, Mrs Beatrice Bamuwagun, applauded the organisation, saying that she had exercised her civic right for peace.
She ask the authorities not to allow hoodlums to hijack the system.
At Ward 8, Polling Unit 5, Mr Monday Njoku, the Presiding Officer, noted the intermittent authentication failure of the card reader.
Njoku added that the rain had not allowed expected compliance of the COVID-19 spacing guideline.
According to him, voters in the unit are not ready to comply with use of sanitiser and directives even from the security agents.
There was a noticeable presence of men of the Nigeria Police Force, Nigeria Security and Civil Defence Corps (NSCDC), and the Nigerian Army, who were seen patrolling in order to ensure adherence to proper electoral conduct.
There was also strict compliance to vehicular movement restrictions as directed by the Inspector-General of Police (IGP), Mohammed Adamu, especially at town borders.
But there was no total compliance to COVID-19 guidelines as prescribed in INEC’s protocols as voters on queue were muddled up.  (NAN)