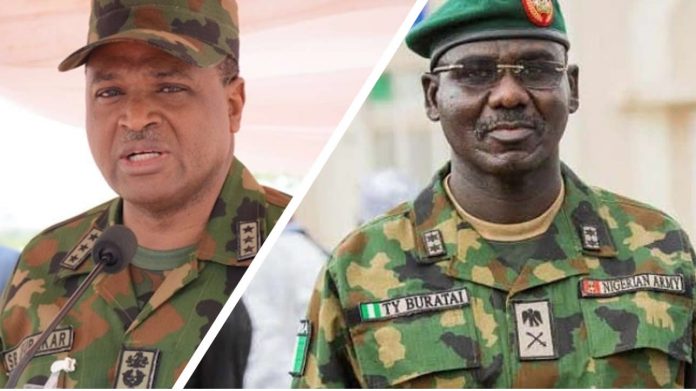 The lack of cooperation and synergy among the top brass of the armed forces has been attributed to the increasing spate of violent attacks by terrorists and bandits in the North East.
In the last few months, the violent activities of terrorists and criminal elements in the North East have increased resulting in the deaths, injury of soldiers and civilians as well as the destruction of property, a de elopement that has attracted the condemnation of President Muhammadu Buhari, governors and traditional rulers in the region.
Last week, the angry Governor of Borno State Professor Babagana Zulu’s, accused the military for the attack on his convoy, in Baga, one of the hot spots of terrorists attacks in Borno, a development the military denied.
A top security source told The Bridge News, over the weekend that the rivalry between service chiefs, especially the Chief of Army Staff Lt. Gen Turkur Buratai and the Chief of Air Saff Air Marshal Sadiq Abubakar is one of the key factors frustrating the war on insurgency in the region.
The source said the two service chiefs in particular have refused to put aside their personal pride to work together as a team to be able to realize the objective of defeating Boko Haram in the troubled region.
“It is very unfortunate that service chiefs for personal interests have refused to work together to defeat insurgency in the North East. They are busy fighting each other and struggling to impress certain persons in government because each of them is aiming to succeed the Chief of Defence Staff (CDS) Gen Abayomi Olonishakin. Because of that they do not share intelligence reports, they do not plan military operations together but work independently of each other. Today, the airforce will send it’s fighter jets to bomb terrorists locations without the required army’s ground troops support. There is no way the operations can be successful if they do not compliment each other”.
The source noted further that the army under Butatai Is in the habit of carrying out attacks and raids on insurgent bases without the necessary air supports and noted that results of such operations would be total failure.
“In situations like this, what you get is disasters. Soldiers are killed willfully because of lack of tact on the parts of the chiefs. There is no way on earth that an individual arm of the military can win this war alone. It requires the efforts of the army, airforce, navy, police and other security services in the country. No single military chief or arm of the military that can win this war alone. It requires the effort of all for this campaign to succeed,” the source stated further.
The angry source added that”if they continue like this, Nigeria will be in this war for many years to come without victory. People have to do what’s right and put personal egos aside. Human lives are involved in this war and no single individual has the right to continue to manipulate things for personal interests”.
The source further lamented that President Muhammadu Buhari should have taken action on this matter since because he was a soldier and an experienced one for that matter “who should know better on why Nigeria is where it is on this terrorism war”.
“Nigeria won’t make any progress in this fight if things are not done differently,” the further stated.