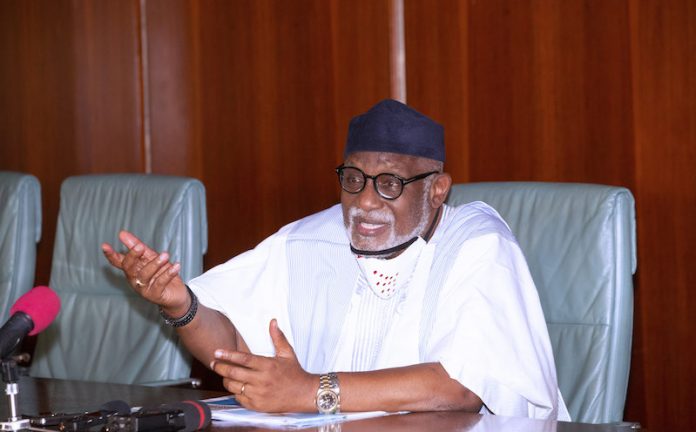 Like in 2016, the major contenders for this year’s governorship election in Ondo State are Rotimi Akeredolu of the ruling All Progressives Congress (APC) and Eyitayo Jegede of the Peoples Democratic Party (PDP).

They were selected at the indirect primary elections held at the International Event Centre in Akure last Monday and Wednesday.

Four years ago, Mr Jegede – a former Attorney General and Commissioner for Justice in the state won the PDP governorship primary by polling a total of 760 votes while his opponent, Saka Lawal, polled a total of 22 votes.

In APC, Mr Akeredolu defeated Olusegun Abraham, the preferred aspirant of a leader of the party, Ahmed Tunubu, by 669 votes. Mr. Abraham, a one-time Chairman of Owena Motel under Governor Adefarati, scored 635 votes to place second in the race.

By the time the election came up in November 2016, Mr Akerodolu polled 244, 842 votes to beat his closest rival, Mr Jegede who garnered 150, 380 votes. Olusola Oke who contested under the banner of Alliance for Democracy, scored 126, 889 to come third.

Four years after, both Mr Akeredolu and Mr Jegede went through difficulties before securing the governorship tickets of the two major political parties in Nigeria.

For Mr Akeredolu, he had problems within his cabinet following his fight with the deputy, Agboola Ajayi, and the Secretary to the State Government, Ifedayo Abegunde.

Mr Ajayi dumped the APC after falling out with his boss; he then joined the PDP. According to him, Mr Akeredolu made the party ‘a poisoned space’ with one man ‘kneeling on its neck’.

While this was ongoing, the SSG – Mr Abegunde resigned and publicly declared that he was opposing his boss’ second term bid. He also alleged that Mr Akeredolu did not win the 2016 election to become governor but he and other unnamed persons helped him despite not winning the election.

In his reaction, Mr Akeredolu called on security agencies to probe the allegations made by former SSG. Also, in the build up of the election, 11 of 12 aspirants seeking the governorship ticket of the ruling party rejected the indirect mode of primary.

They argued that such an election is often slanted to favour the incumbent governor because it often has automatic delegates in the mold of former governors, former deputy governors, former speakers, deputy speakers, serving National and State Assembly lawmakers.

But the party maintained that the aspirants cannot decide for APC. Amidst all these, there were talks with some persons to step down for Mr Akeredolu – that was not going to happen until a few hours to the primary election on Monday.

Four out of 12 aspirants stepped down. One of them included Mr Abraham – the governor’s closest rival in 2016 and also Mr Tinubu’s ally. But, Olusola Oke, lsaac Kekemeke and five others continued with the race.

Eventually, Mr Akeredolu won in all the local government areas of the state, with 2,458 votes. His closest rival, Mr Oke came second with 262 votes while Mr Kekemeke came distant third with 19 votes.

Mr Kekemeke, who spoke before the poll, said “there were a lot of unscrupulous schemes by the committee to subvert their interest ahead of the October 10, 2020 governorship election.”

“For me, this process is unfair. It is aimed at producing a predetermined result,” he said.

Speaking on Friday, Mr Oke, also said he was giving Mr Akeredolu seven days to conclude all reconciliation efforts with a view to uniting all aggrieved members of the party.

After a meeting with members of his campaign organisation, he noted that “it is important that the reconciliation should be comprehensive and involve all the strata of our party. That is the only reconciliation that will instill confidence in our people.”

“Whatever negotiations should be done timely, we are expecting that within the next seven days all reconciliation efforts, all terms and conditions would have been agreed upon,” he said.

Like Mr Akeredolu, the journey was not as rosy as expected for the PDP candidate Mr Jegede, especially after the deputy governor, Mr Ajayi joined the race. The development divided the party and those who were very loyal to Mr Jegede.

The popular opinion then was that Mr Ajayi had the money and key political position as deputy governor to buy his way as the candidate of the PDP, but Mr Jegede, who despite losing in 2016 refused to dump the party, had loyalty.

Mr Jegede faced other challenges. Two PDP bigwigs from Mr Ajayi’s Ondo South senatorial district, Solomon Bitire and Daisi Mafimisebi, in January wrote to the PDP National Chairman, Uche Secondus, that it was the turn of their zone to produce the next governor or else the party stood no chance in the election.

They argued that Mr Akeredolu is from Ondo North; his predecessor, Olusegun Mimiko was from Ondo Central (where Mr Jegede comes from), then, it’s automatically the turn of the South.

Mr Jegede maintained that he had control of the party’s loyalists in the 18 local government areas of the state, having contested before.

“I contested against his (Agboola Ajayi) boss, Governor Rotimi Akeredolu in 2016 and I came second. Myself and his boss contested in 2016. If Akeredolu was not a threat to me in 2016, his deputy cannot be a threat to me or my ambition in 2020,” he said.

Mr Jegede defeated Mr Ajayi and other aspirants by polling 888 votes against the deputy governor who had 657 votes. His emergence appears double jeorpardy for Mr Ajayi as he will now have to fend off an aggressive plot to remove him from office.

He has, however, said he will join hands with Mr Jegede to defeat Mr Akeredolu. For the governor, he has said he would win his reelection based on his first tenure performance as governor.

Both candidates have boasted that they are favourites of the Ondo People but there are a lot of factors to be considered – the power of incumbency may not really matter, analysts opined.

Though a member of the Zenith Labour Party (ZLP) a former governor of the state, Olusegun Mimiko, is being wooed by PDP and APC leaders. Mr Akeredolu was reported to have met Mr Mimiko, after which PDP leaders in the Southwest also visited him.

Details of the meeting between Mr Akeredolu and Mr Mimiko were not made public, but Oyo State Governor Seyi Makinde led some PDP members to visit Mr Mimiko to solicit his support in the coming election.

John-Paul Akinduro, a media aide to Mr Mimiko said: “Dr. Mimiko is an accomplished political leader, who is a role model to many politicians across party divides. With regard to the coming governorship poll in Ondo State, I can tell you that almost all the aspirants from the parties have come to see him in Ondo to seek his support and mentorship.

“You must also know that Makinde is a ‘brother’ to Mimiko. The two speak from time to time on issues of national interest.

“The former governor’s priority is for a greater Ondo State. He believes government should be about people and service and this he has demonstrated in his eight years as governor of Ondo State.”

Another factor in the upcoming election is the issue of zoning and if considered may not favour Mr Jegede.

The unpopular opinion in the state now is that if Mr Akeredolu who is from Ondo North had served from 2017 till 2020, a candidate from South should follow.

But sources within the two parties who spoke with PREMIUM TIMES disclosed efforts are being made to ensure that political leaders use their influence to make sure that parties resolve all crises within them before the election period.

For political analysts, the performance of the incumbent governor may have only little to do with the outcome of the election as most elections are determined by strategies adopted by parties.

“It is going to be too close to call in the sense that the two candidates can manage the internal crisis in their parties. But beyond this, would the political power holders in Ondo want power to shift to Central after just one term of the north?” Jide Ojo, an analyst said.

“What matters now is reconciliation. Olusola Oke has said Akeredolu should try to reconcile within seven days. If reconciliation is done, Akeredolu may scale through… Issues of performance or non performance has never been a factor in Nigerian politics. The power brokers only need to agree and they will get you in.”

Mr Ojo, however, said the current realities may favour the PDP.

“The defection of Ajayi, the SSG and other key party members may cause APC a lot. In addition, if they are not careful with the handling of the Ajayi impeachment saga, some lawmakers may also defect. So, APC must start strategising on where to pick their deputy, SSG and other key positions.

“If APC do not want what happened in Oyo State to repeat itself, Akedolu must reconcile with all those he seems to have offended in the past and make sure they don’t lose members again to PDP as it is happening in Edo State.

“For Jegede, the senators in PDP must be ready to work for him to strengthen his chances. Then, he needs to be sure of the political worth of Ajayi and the SSG that resigned. He may win. This is not the first time governors will do one term and then be sacked in their second term bid. Remember what happened to M. A. Abubakar in Bauchi who could not win a second term. Jubril Abindo in Adamawa could not also win reelection because he was unpopular with the people”

“Ondo is sophisticated politically. Anybody can win and lose. It is not a state with one sided party like some states. Like Rivers where PDP will always and the goal and Lagos of APC. So, if the Federal power fails to come to Akeredolu’s aid and he refuses to reconcile, he may lose and Jegede may win,” he said.

The analyst said the two candidates must start negotiating across all zones and regions in the state.

“The calculation will be – where does the real vote come from? And who are those strategizing for Akeredolu and Jegede? Jegede has become a known name but will the people from Ajayi’s zone trust him enough and vote for him?” 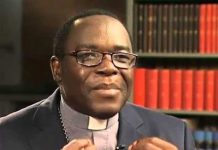 Sermon On The Feast Of Christ The King, Bishop Matthew Hassan KUKAH 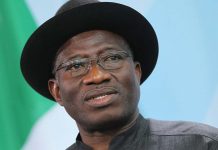 GEJ At 63: Goodluck Jonathan, A Man For All Seasons 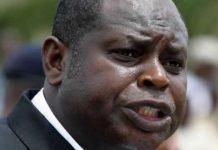 A ‘Word’ For Chief DSP Alamieyeseigha, Today On Your 68th Posthumous Birthday