Abuja has six confirmed cases as of Monday afternoon, concerns over a wider spread have soared in the capital city. Schools, religious and public activities have been shut and or restricted to the barest minimum as it is in many parts of the country.

Being the first point of contact in an emergency situation of any COVID-19 outbreak, the risk of hospital-related transmissions of coronavirus is very high in Abuja, PREMIUM TIMES‘ findings showed.

PREMIUM TIMES, during the weekend, conducted an investigation based on direct observation of several hospitals and health facilities in Abuja on their level of precaution against the spread of the virus.

Our findings showed that the facilities, including the National Hospital, are not serving as a model in terms of preventive measures and also barely prepared to help stem a viral spread.

People could walk into the National Hospital without even a basic temperature check.

A five-second temperature check in the eye with a hand device has become a routine activity at various public places, especially at the airports. However, this is not so at the National Hospital, one of the most visited health facilities in the country.

The administrative block appeared deserted and scattered. A renovation was ongoing. Workers were on ground painting and fixing new equipment in the hospital’s emergency areas.

Also being fixed Saturday evening were automatic hand sanitisers on the hospital walls – just in the wake of the capital’s first confirmed cases of COVID-19.

The sanitising gels were being fixed at close intervals around the whole facility, a staff in the communication desk explained. She said it was a part of the hospital’s safety measures against the spread of coronavirus.

The staff who refused to give her name as she is not the official spokesperson of the hospital said there are clean water and soaps and other sanitary products in all toilets in the facility.

However, when our reporter checked, there were no soaps or sanitising gels in any of the toilets in the admin block, though the water was running.

The toilets were unkempt as dirty water and wet cartons lie scattered on the floor and sinks. There were no toilet papers and or hand wipes.

Most of the health workers and staff were not wearing face gears and hand gloves. The maternity ward was a bit scanty, with no more than 20 people. The unnamed staff said that the facility had placed a directive of maintaining social distance at all times.

There were no sensitising messages on the walls across the National Hospital on safety measures against COVID-19.

Unlike the National Hospital, our reporter was promptly screened by a zealous security official. Questions regarding symptoms of COVID-19 were also asked.

However, there were limited hand gels on the walls of the facility. Only a few health workers could be seen wearing protective gear. There were clusters of at least 20 patients at the open reception in breach of the government’s social distancing advisory.

Apart from the reception, no signs or precautionary messages were observed in other parts of the facility.

A visit to this hospital Saturday afternoon indicated a low preparedness to stem the spread of the virus in Bwari area council as there are no visible measures being taken to checkmate the influx of people into the hospital.

At the entrance of the hospital, our reporter observed that there was neither temperature check being conducted nor hand-sanitiser being given to people.

When the reporter approached the Accident/Emergency unit to seek medical attention, a male nurse — the only medical personnel on the ground— was about to attend to a woman who held her child, obviously ill, to her chest.

Despite a bottle of hand-sanitiser in his front, he never used it before laying his hand to check the temperature of the child.

After some minutes when the reporter approached him to complain of abdominal pain and flu symptoms, he directed her to obtain the hospital card first.

The record attendant, however, said he would not issue any card to her since there was no doctor to attend to her.

“I cannot give you any card; doctors are on strike. Wait till they resume, ” the attendant said with a blank face. “Come back next time.”

Back to the nurse, the reporter relayed her challenge with the attendant to him and he said there was nothing he could do.

He admitted he was not going to attend to the reporter initially because he was only attending to emergency cases involving children.

Since “the doctors are on strike,” he advised “take paracetamol” as a painkiller or seek medical attention in private hospitals around the council.

On both sides of the entrance to Wuse General Hospital, one would be greeted with an instruction “Please wash your hands.” Although, no one manned the entrance to ensure this was done by visitors.

“They’re all on strike,” a security official told our reporter when asked if doctors were on duty.

Inside the accident and emergency unit, two nurses attended to our reporter, checking his temperature, without hand gloves or face mask.

Unlike Wuse Hospital, at Garki Hospital, a security operative, with a pair of hand gloves and her face masked, was at the entrance ensuring people get their hands sanitised.

Nonetheless, there were no temperature checks on visitors to the hospital.

While the main entrance to the hospital was unmanned for likely health checks, the hospital building had a sanitiser dispenser hung on the left side of its entrance.

The hospital was deserted, save for a patient a nurse was running a test on.

“We are not on strike,” one of the attendant nurses said. “You can bring your sick brother.”

The hospital has an inner room which has only a bed space, suggesting that the hospital can only take but a few.

Tucked beside Area 1 market, the hospital is flanked by stalls and shops which had people thronging around it at the time of visit.

Barely any difference at Nyanya, Karu

Karu General Hospital has hand sanitiser and water at the entrance, but visitors are left to make that provision a matter of personal choice.

“Did you not see it when you entered,” responded a security man when told there was no instruction for people to use the sanitiser. “You that entered should use it.”

The staff observed had no protective equipment and there is no messaging on the walls or the notice board on COVID-19.

The toilets have running water but do not have soaps or toilet papers.

At Nyanya, however, a staff is stationed at the gate insisting every visitor should use hand sanitiser.

The Minister of Health, Osagie Ehanire, had said Nigeria was prepared to handle the COVID-19 outbreak.

To show preparedness for the virus, three laboratories were opened in Lagos, Abuja and Edo for testing the virus.

Nigeria on Monday confirmed that one person had died of the 36 who had been confirmed to be infected as at Monday afternoon. 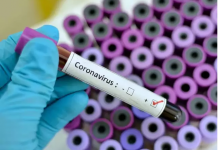 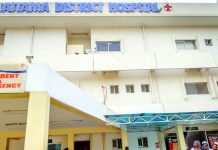