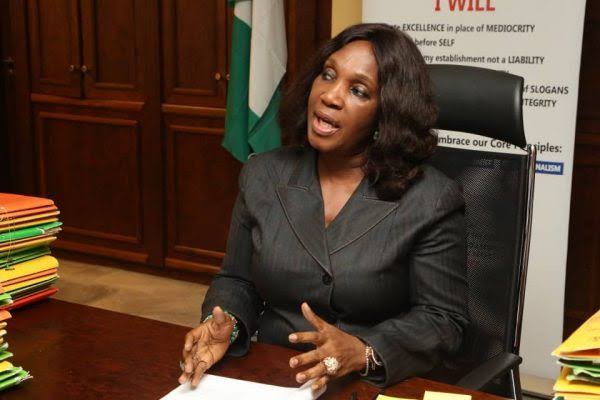 The acting Managing Director of the Niger Delta Development Commission (NDDC) Mrs Joy Nunieh was sacked because she did not undergo the compulsory National Youth Service Corps (NYSC) The Bridge News can confirm.

Nunieh was replaced as acting MD of NDDC, on Wednesday by President Muhammadu Buhari citing no reason for her removal.

“She lied that she served when in actual fact she didn’t serve. From all available records she neither did the NYSC nor got exception certificate from the NYSC. So all the claims that she served in Kwara state are all lies,” a Presidency source said.

Our correspondent further gathered that the embattled former acting NDDC boss only submitted a letter from the Legal Education Council stating that she lost the certificate after her service when she was appointed as acting NDDC.

A top Presidency source told our correspondent that Nunieh was fired when petitions were written to the Minister of Niger Delta Mr. God will Akpabio following her appointment but that when she was asked to present the NYSC certificate she couldn’t produce any certificate to back her claims.

“It’s sad that people are not just honest. She did not do her NYSC and instead of saying so she ran to the Legal Education Council to bail her out. Which is more important? It is the letter from the Council or the certificate. She did not serve period,” the source stated further.

Our correspondent gathered that the Inspector General of Police (IGP) Mohammmed Adamu is already preparing charges against the her for falsification of information.