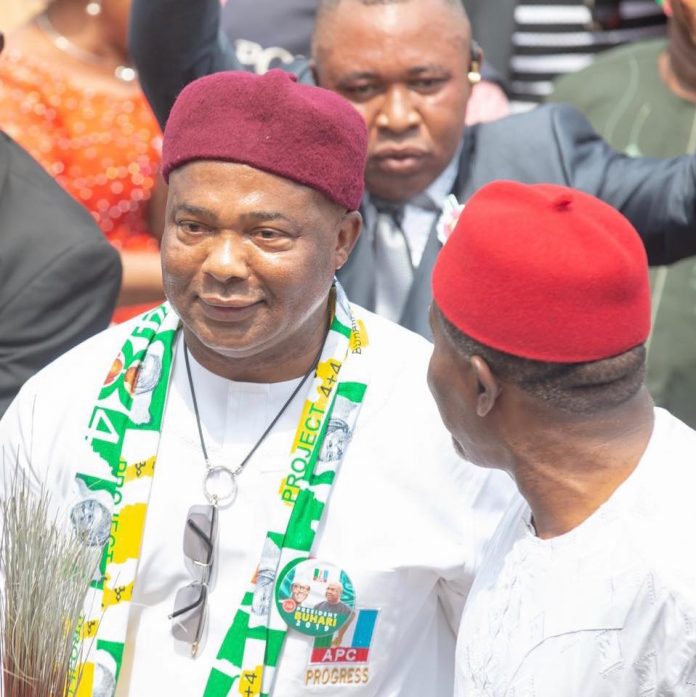 Executive Governor of Imo State, Senator Hope Uzodinma has assured that the State willprosper under his watch. The newly sworn-in Governor also said that the era of Executive Lawlessness and neo-feudalism, in the stateis gone forever. Addressing Imolitesin his maiden broadcast today, 22ndJanuary 2020, Governor Uzodinma enumerated policy measures which his Administration intends to apply to achieve the dream of a New Imo. They include restoration of due process, financial discipline, re-invigoration of the heath sector and security of lives and property.

The Governor stated that hisvision of a New Imo State is predicated on freedom, security and shared prosperity welded into good governance, stressing thatthe evidence on ground indicates that Imo State requires fundamental reform to forge a new trajectory.
To achieve his vision of Rehabilitation,Reconstruction and Recovery, Governor Uzodinma directed the overhaul of the bureaucratic structures to entrench strict adherence to extant laws, procedures and statutes to achieve efficient service delivery. He assured of prompt payment of salaries, pensions and other statutory obligations.

On education, Governor Uzodinma announced that a highly functional, qualitative and science-driven education system,focused on skills acquisition, innovation, manpower development and entrepreneurship code-named IMO STATE EDUCATION OPPORTUNTY PROGRAMME (ISEOP) shall be established with a view to producing a new generation of graduates equipped for immediate employment and self-reliance.

For the health sector, the Imo Governor promised to pursue a policy of comprehensive Medicare with primary and preventive components which shall achieve 75% coverage of the populace across the 27 LGAs within the first two years.

In this vein, the state shall recruit 850 Community Health Workers, renovate and equip Community Health Centres in the 305 wards, procure modern diagnostic equipment, including CT scan and mobile X-ray as well as provide Rapid Response Ambulance Services (RAMS) at the Zonal Hospitals and Central Rural health Centres he said.

The Governor explained further: the IMSU College of Medicine and the Teaching Hospital at Orlu, the Public Health Laboratory and the Specialist Hospital in Owerri shall be equipped for lesser surgeries, as well as serve as Regional Medical Infomatics Centres for the South East Region. The abandoned MRI and other sensitive scanning machines mysteriously transferred from IMSUTH Orlu to ‘OCHIEDIKE” shall be rehabilitated and restored for service.

To channel the economy to massive growth and job creation, Governor Uzodinma pledged to focus on Mainstream Macro-economic programmes based on his “3R Algorism”—Recovery of damaged economic structures, re-construction of core infrastructure and rehabilitation of component micro-economic institutions with the overall aim of achieving rapid economic diversification through ‘Backward integration’ involving a synergy of Rural-urban paradigm shift from a core public-sector-driven economy to Public-Private-Partnership (PPP).

Governor Uzodinma also announced the establishment of a State Economic and Rehabilitation Council (SEDARC) to redress the fiscal and infrastructural deficits militating against economic development in the state.

Additionally, the Council has the mandate to recover missing public assets as well as co-ordinate a forensic investigation into the finances of the state to establish the true financial status as at January 13, 2020; together with the recovery of all illegally acquired private lands to enable their return to their rightful owners.”

On Local Government administration, Governor Uzodinma while guaranteeing the restoration of autonomy to the third tier of Government, pledged to conduct a credible Council election in due course, even as he approved the reconstitution of the State Local Government Joint Accounts Allocation Committee to manage and superintend over Council funds, including 10% which the state shall statutorily contribute as counterpart fund to support development at the grassroots.

To boost the security architecture of Imo State, the Governor announced the establishment of a new Neighborhood Security outfit code-named “North East West” (NEW) involving a coordinated network of community intelligence-gathering programme to complement the conventional security Agencies. The Governor declared that Imo shall become uncomfortable for criminals with the launch of “Operation Flush Out Criminals” (FOC).

Promising to run an open and accommodating administration, Governor Uzodinma however warned political opponents that breach of public peace shall not be tolerated, stating that he has the responsibility to govern Imo State and will not hesitate to visit the full weight of the law on anybody who constitutes a public nuisance.

Governor Uzodinma, who was full of appreciation for the massive support which he received from the people during the election, urged for sustained cooperation to enable full realisation of his mission to bring prosperity to the state. 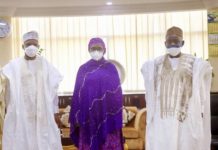 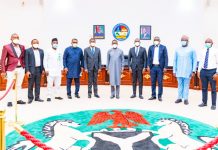 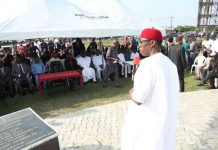