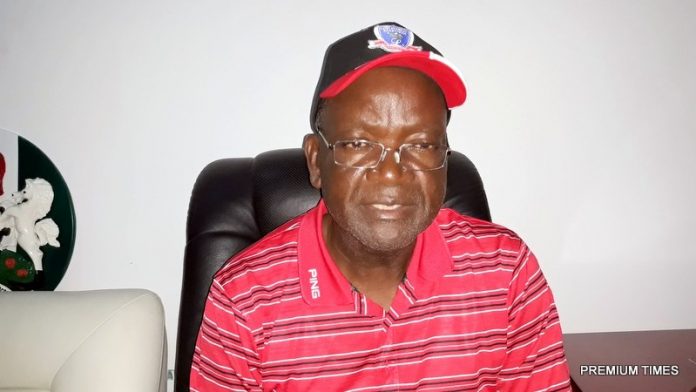 The Supreme Court on Tuesday upheld the re-election of Samuel Ortom of the Peoples Democratic Party(PDP) as the governor of Benue State.

The seven-member panel of the apex court said it aligned itself with the concurrent judgements of the two lower courts.

“I have agreed with the submissions of the respondents that the concurrent judgments of the Tribunal and Court of Appeal should not be disturbed.”

“There must be an agreement between the number of accredited voters and the total votes,” Mr Ali explained.

The senior counsel added that dismissing Mr Jime’s appeal would imply that funds spent on putting the card reader system in place were in vain.

Mr Jime’s lawyer further said contrary to what the respondents have argued, his clients were not required to call witnesses from each of the disputed polling units.
This Mr Ali said was because the appellant’s case was not built on allegations of violence which would require eyewitnesses to testify about.

“When the allegation is that election results are either not properly accounted for or not properly collated, it is not required that witnesses would be called from each polling unit,” he said.

On his part, the Independent National Electoral Commission(INEC) lawyer, Uyi Igunma, in urging the court to dismiss the appeal said the appellant’s argument was mere distractions.

According to Mr Igunma, “The peculiar fact of this appeal is that the appellants have no evidence either oral or documentary that they can rely on.

“It is admitted by them in their appellants’ brief that the tribunal had ruled that 59 of their witnesses were unreliable and that their documents were dumped.”

The INEC lawyer said the appellant relied on the smart card reader and that the card reader report was not properly put before the court.

He said the issue of card reader was settled at the tribunal.

“The issue of card reader has been settled by the tribunal when they did not even raise it at the court of appeal. From whichever angle we look at it, there is no evidence to support this appeal,” he said.

Mr Igunma said the appellants only called 59 witnesses when they complained about the results from 626 polling units.

“Even if the totality of their witnesses were to be believed they are insufficient to prove the allegations in the petition, he added.

“It still will not substantially affect the results of the election. It is merely academic,” INEC lawyer said.

Mr Ortom in his argument through his lawyer, Sebastine Hon, said that the appellant’s case ;acked evidence, as the card reader report which they relied on was struck out by the tribunal.

“However, the tribunal struck out the evidence of P59 through whom they tendered the card reader report.

“Appellants appealed to the Court of Appeal against that ruling but they willingly withdrew it and it was dismissed.”

According to the senior lawyer, “Despite that, appellants have argued issues 1, 2 and 4 on the card reader. This is a gross abuse of the court process. We urge your lordship to terminate that abuse.

“Since issues 1, 2 and 4 are struck out their remaining issue 3 is so lean that it cannot sustain the appeal.

“There are material contradictions between their pleadings and results declared. Once you fail to reproduce the results raw, the petition is gone.

“Figures in the petition are self-contradictory in all respects from tribunal to the Supreme Court.”

“Fundamentally, they are seeking to overturn concurrent findings of fact, but they made no reference to evidence.

“The concurrent findings of the court are as Rock of Gibraltar. ”

The lawyer, Chris Uche, representing the PDP, also asked the court to dismiss the appeal and “uphold the concurrent decisions of the Court of Appeal and the tribunal in holding that the second respondent, Samuel Ortom, was duly elected and validly returned as the winner of the governorship election”.

Mr Uche added that “the appellants’ case suffered from acute evidential deficiency both in quality and quantity”.

The senior lawyer also said, “the appellants failed to show any perversity whatsoever in the findings of the Court of Appeal and the tribunal”.

He also said electoral umpire introduction of card reader “has not changed section 49 of Electoral Act which deals with accreditation or section 53 which deals with over-voting”.
“The barometer for adjudging over voting still remains the card reader. Even the amendment of section 52 of the Electoral Act did not have anything to do with accreditation,” Mr Uche argued. 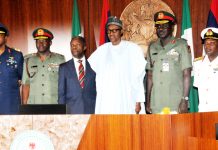 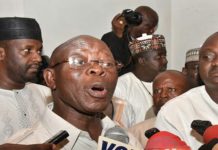 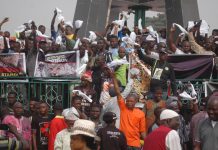