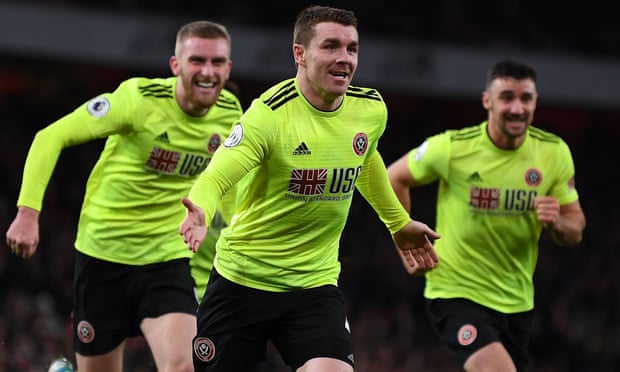 For all the improvements Arsenal have made under Mikel Arteta, their inability to see a game out remains chronic. They lost a lead here for the third time in his six-game tenure, continuing a theme that has dogged a miserable Premier League campaign and makes a mid-table finish increasingly likely.

A goal close to half-time by Gabriel Martinelli, the brilliant 18-year-old who stood in ably for suspended captain, Pierre-Emerick Aubameyang, looked like being sufficient to win but John Fleck’s superbly taken equaliser, lashed in seven minutes from time, left Arteta frustrated again and provided fresh evidence of the redoubtable quality Chris Wilder has instilled in Sheffield United.

Martinelli should not have been the only understudy to make an impression during a generally turgid first half. Lys Mousset had replaced the injured David McGoldrick, who has none of Aubameyang’s goals but a similar level of importance to his team, for Sheffield United and had a fine chance to open the scoring in the eighth minute.

An assertive start from the visitors looked likely to yield a reward when Enda Stevens, presented with the ball by Ainsley Maitland-Niles, advanced before putting a perfect cross on to Mousset’s head. It was Mousset who scored the only goal when these teams met at Bramall Lane in October, but this time he nodded wide from 14 yards when unattended and Arsenal’s sloppy opening went unpunished.

A rapid break then brought a first sniff for Martinelli, who should have done better. The chance came when Alexandre Lacazette cut the left side of the defence open with a laser-like pass on halfway to send Nicolas Pépé running in behind. Pépé’s cross was perfectly weighted for Martinelli, running on to the ball at the far post, but his volley – on his weaker left foot – lacked conviction and rolled across goal.

There were two teams on the pitch and there was also Mike Dean, for whom this was a 500th top-flight game. His presence is never met with bunting around these parts but he operated with a light enough touch during a combative but low-quality opening period, booking Oliver Norwood four minutes in for a late challenge on Lacazette but generally having little effect on a game that needed little help to be maddeningly stop-start.

Most of Arsenal’s best work came through Pépé, notably more assertive than at most points since his arrival last summer. One darting run that beat two defenders was followed by a pass that took out two more, only for Martinelli to shoot wide of the near post. But proceedings had virtually ground to a halt before Martinelli made it third time lucky.

Lacazette’s first-time lay-off found its way through to Bukayo Saka and the left-back’s centre, snicking off George Baldock, offered the Brazilian a gift two yards out. He will never tap in an easier goal but it was a triumph of perseverance and also a feather in the cap for Saka, a natural winger who had performed tirelessly.

Surely the need for Paris Saint-Germain’s Layvin Kurzawa, who Arsenal are interested in signing, will diminish if Saka keeps this up. He began the second half with a devilish delivery that was well defended and then, caught by a stray arm from George Baldock, needed treatment after going down in a heap. Arsenal had resumed at speed although they are rarely more than one remove from a drama.

That idea was almost borne out in the 56th minute when Oli McBurnie rose to meet a corner from the right and headed it towards goal, with Bernd Leno nowhere. But Granit Xhaka was well stationed by the goal line and hacked the ball clear after it had first struck his chest. United shrieked for handball but, even in today’s climate of nonsensical awards, never had a case.

John Lundstram skied an ugly effort into the top tier after another corner had been half-cleared. The visitors were still in the contest, which essentially remained shapeless, as it entered its final quarter but held their breaths when a VAR check decided Pépé had not been felled in the box by Jack O’Connell’s dangled leg.

It seemed a marginal call and proved critical.

Wilder’s side were hardly bashing the door down when Fleck struck although, moments before, McBurnie had again risen highest at a set-piece only to head straight at Leno. When the substitute Callum Robinson stood up a cross from the right corner of the box another replacement, Billy Sharp, won a crucial flick-on. Fleck’s finish, volleyed into the ground and up into the far corner from an angle, was technically perfect.

Worse almost followed for Arsenal but Maitland-Niles blocked crucially from McBurnie at the death. 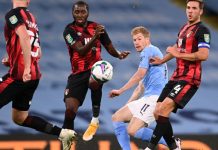