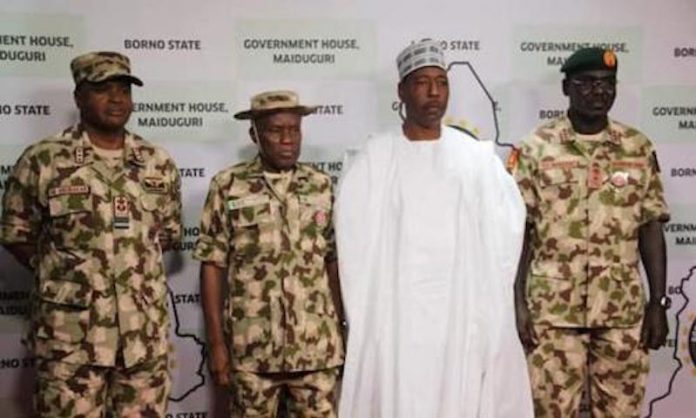 The Federal Government said it has adopted proactive measures to review the counter insurgency operation to ensure total eradication of the remnant of Boko Haram insurgents hibernating in parts of the northeast.

The Minister of Defence, Maj.-Gen. Salihi Magashi (rtd), stated this when he paid a courtesy visit to Gov. Babagana Zulum, on Monday in Maiduguri.

Magashi disclosed that the measure was imperative to review the implementation of the campaign to rout out insurgents and restore peace to the region.

He said that: “We intend to re-design the battle to suit the environment we are operating so that with seriousness we can take on the Boko Haram and see to their end.

“I assure you; the Federal Government is doing its best to provide resources both human, capital and equipment to ensure that operation is done properly and with the speed it deserve.

“We are in this operation for the past 10 years and the country cannot afford to continue in this battle, we must take the bull by the horn.

“We can do it and I reassure the people of Borno that the situation will soon come back to normal.”

Magashi, who expressed satisfaction with level of synergy between Nigerian and Chadian troops, said the visit was to appraise the progress of the operation in northern Borno and Lake Chad basin.

The minister lauded the governor over his support to the troops which facilitated successful implementation of the campaign.

Responding, Zulum commended President Muhammadu Buhari and the military over the successes recorded in the war against insurgency and peace restoration process.

Zulum, however, urged the military authorities to lift the embargo placed on fishery and trading activities in Baga and other communities as well as re-open some major highways to ease transportation and boost commercial activities.

He also called for the re-establishment of civil authorities at Malumfatori, Abadam and Marte liberated communities to fast track resettlement and encourage growth of social and economic development of rural communities.

The governor announced plans by his administration to reconstruct houses to facilitate resettlement of Banki and other liberated communities in the state.

“We must rise up to see the end of the crisis, we will collaborate and be courageous in the face of the crisis. We need the military to give us unhindered access to respond to distress areas.

Zulum further commended the military over the re-opening of Maiduguri-Damboa Road, noting that the gesture would ease transportation as well as improve social and economic wellbeing of the people.

News Agency of Nigeria (NAN) reports that the minister was accompanied on the visit by the Chief of Air Staff (CAS), Sadique Abubakar, Chief of Army Staff (COAS), Lt.-Gen. Tukur Buratai and other military brass.

Magashi, who was on an operational tour in the northeast, had earlier held closed door meeting with commanders at the Military Command and Control Center, Maimalari Cantonment, Maiduguri.