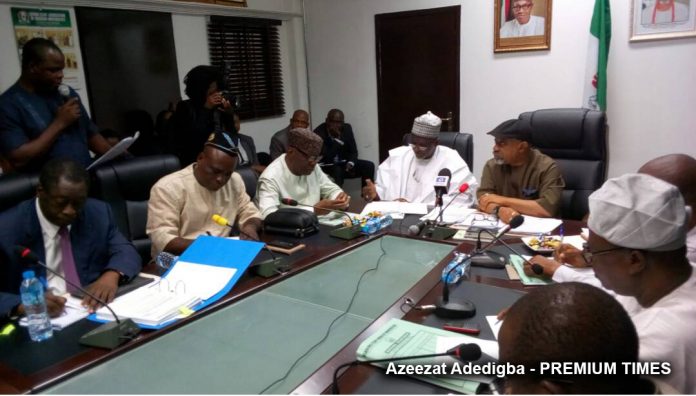 Nigerian federal university workers on Monday again said they would automatically go on strike in November if the government carries out its threat to withhold their October salary for refusing to enrol in a ‘new’ payment system.

The federal government and the Academic Staff Union of University (ASUU) are locking horns over the implementation of the Integrated Personnel Payment Information System (IPPIS).

Tired of dragging the matter with ASUU, the Office of the Accountant General of the Federation last week said the staff of any university that failed to enrol in IPPIS would not be paid their October salaries

But the teachers are now saying should that threat be carried out, they would respond by staying away from work.

“We already have a standing order of ‘no salary no work’ which means our members would not turn up for work should they not receive their salary alerts on the last day of the month,” said Lawal Abubakar, ASUU’s Zonal Coordinator for Bauchi zone.

Mr Abubakar, a professor at the Tafawa Balewa University (ATBU), on Monday addressed a press conference at the ASUU Secretariat in ATBU.

Mr Abubakar, who spoke for officials of the zone, said university autonomy is a matter of law, and no government policy can override extant laws.

“I do not need to draw a diagram to show that extant laws are superior to policies,” said the ASUU zonal chairman.

“ASUU, Bauchi zone is shocked at the flagrant disregard to the laws of Nigeria and attempt to forcefully implement the IPPIS policy in the Nigerian federal universities,” he said.

The lecturers accused the Office of the Accountant-General of the Federation, World Bank and the International Monetary Fund of misadvising President Muhammadu Buhari and “inserting (as alleged) a directive on IPPIS in Mr President’s budget speech at the National Assembly.”

The zonal branch said it had a ” firm belief that if Mr President was confronted with a policy against a law, he would go with the law.”
Accountant General, Nigeria’s problem

The university lecturers said public offices like the Account General of the Federation are “the problems of Nigeria.”

Mr Abubakar said ASUU at the national level has announced its position and the zonal level was also reechoing that enforcing IPPIS on universities is not only a violation of university laws, especially the hard-earned autonomy, “it is a relegation of the federal government’s agreement with ASUU.”

“IPPIS is unable to honestly and sincerely accommodate the peculiarities, nature, and structure of the Nigerian universities. It is also unable to address the many negative concerns and its foreseeable consequences.”

The Nigerian government said it adopted IPPIS as a centralised payment system to block leakages and curb corruption.

But the lecturers said there are sufficient inbuilt measures in the current structure of the university system ” that is capable of checkmating corruption”.

“If truly the government is really serious and interested in fighting corruption, it shouldn’t be about changing the direction.

“Because you are a man of integrity, so the system should collapse?” he said.

On how the IPPIS may affect lecturers, he said “the university may no longer be able to assist a lecturer who has issues with either his research allowances, or his rent allowance or his retirement benefits, because such a lecturer would have to travel to Abuja before he or she can get that done. But the university system is too dynamic for such delays and bottleneck.

“Secondly, the university system is so flexible that a lecturer may decide to disengage from service at any time. So should such a situation arises, and a vice-chancellor whose university has lost its autonomy needs to get replacement, must have to go through some offices in Abuja; and when such officers would insist they have their candidate included in the list. A VC that rejects this would have to suffer the consequences of future denials of approvals, ” he said.

Dangers of IPPIS to University

“Like it has been pointed out, this IPPIS thing has been in the offing as far back as 2006, and the union has continued to engage successive governments in Nigeria that this thing is not applicable to the universities,” the don said.

He said the media has a role to play in the ongoing controversy that what ASUU stands against is the “disregard to rule of law by the government.”

“What we are asking for is our country to be governed by the rule of law and not by convenience.”

The Nigerian government has issued a warning that if ASUU refuses to embrace IPPIS by end of this month, the salary of its members may not be paid.

But the lecturers in Bauchi called on their colleagues “all over the country to continue to be with ASUU and support the leadership by not filling the biometric forms needed by the office of the AG as a prerequisite for enrolling them on the IPPIS platform. ”

Mr Abubakar said “no one can force ASUU to sign into IPPIS because the system requires us to fill the form, get our biometric data captured before one can be in the payment system.”

“We are not going to do that. And should they withhold our salaries, there is a standing instruction that we don’t show up for work a day after the last day of the month,” he said.