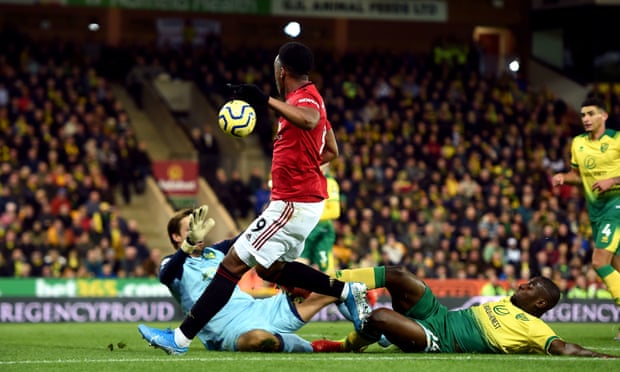 You wait almost seven months for an away victory and then two come along in the space of four days. Manchester United finally recorded a first Premier League win on the road since Ole Gunnar Solskjær was appointed permanently thanks to goals from Scott McTominay, Marcus Rashford and Anthony Martial, although it could have been even worse for Norwich had it not been for the heroics of their goalkeeper, Tim Krul.

The Dutchman’s two penalty saves in the first half to deny first Rashford and then Martial after VAR had overturned the referee Stuart Attwell’s original decisions kept the hosts in the game longer than they probably deserved, in truth, such was the disarray of their defence at times. But a clinical away performance ensured United rounded off a promising week in style, even if Solskjær will know that much tougher challenges surely lie ahead.

“It’s been too long but it’s great to have ended that run. If we play like we did today, we can beat anyone,” said Solskjær, who insisted both penalties should have been retaken because Krul was off his line but was otherwise full of praise for his attacking players. “We’ve missed Anthony for the last two months and his partnership with Marcus is going to grow and grow.”

After his winning goal against Partizan Belgrade in Thursday’s Europa League tie, Martial’s first league start since the home defeat to Crystal Palace at the end of August had allowed Solskjær to abandon the formation that served him so well in Serbia and against Liverpool last week. The Frenchman began as the lone striker in a 4-2-3-1 system that saw Rashford and Daniel James on the flanks.

The Norwich manager, Daniel Farke, was able to name the same side which had picked up a first clean sheet of the season at Bournemouth last week, a result that ended a run of three successive defeats since the surprise win over Manchester City. Their prospects of becoming the first promoted side to beat both Manchester clubs in the same season since Wolves and Portsmouth back in 2004 seemed promising in the early exchanges as a surging run from right-back Max Aarons set up Todd Cantwell for the game’s opening chance, only for the England Under-21 midfielder to curl his shot over the crossbar.

For all the positivity which followed the draw against Liverpool, United went into this game having won just four of the 17 league matches since Solskjær assumed full control and with their lowest points tally at this stage of the season since 1986‑87. But after weathering the early storm, the way in which Martial and Rashford combined in the move that eventually led to their opening goal will have given their manager great optimism for the future. A brilliant one-two which almost evoked Dwight Yorke and Andy Cole’s memorable goal against Barcelona in 1998 was only denied by a sharp save from Krul at his near post, with the Norwich goalkeeper somehow doing even better to keep out Martial’s header from the ensuing corner. Krul could do nothing about McTominay’s thumping drive from the next one, however, with Cantwell punished dearly for failing to clear when he had the chance.

The fleet-footed James was next to test Norwich’s beleaguered backline when he broke free in the area and went down under a challenge from Ben Godfrey. At first, Attwell ruled it wasn’t a penalty, only for a lengthy VAR check to reverse his decision. Justice was perhaps done when Krul easily gathered Rashford’s weak spot kick, although the Dutchman was soon having to pick the ball out of his net again. A quick turnover when Cantwell lost the ball in United’s half allowed James to find the unmarked Rashford on the left flank and this time the England striker made no mistake.

Perhaps desperate to make amends for his errors, Cantwell called David de Gea into action for the first time with a shot from just outside the box.

But disaster struck again just before the break when VAR again ruled in United’s favour, deciding that the Norwich midfielder had blocked a shot with his arm. It was another harsh call, although Krul, who was famously brought on for the Netherlands’ penalty shootout victory over Costa Rica in the 2014 World Cup quarter-final, came to his side’s rescue again.

Cantwell was put out of his misery at half-time when he was replaced by Onel Hernández and immediately Norwich looked more of a threat going forward. Teemu Pukki spurned a golden opportunity after another driving run from Aarons saw the Finland striker scoop the ball over from close range. A lightning-quick break from United should have resulted in a goal for Martial, only for Krul to foil him once more. The France striker would not be denied his goal, however, stroking home 17 minutes from time, after a sumptuous backheel from Rashford, to seal the points. Hernández’s late strike was far too little too late, with Norwich now deeply mired in the bottom three and looking vulnerable. “We have to learn our lessons quickly,” Farke said. 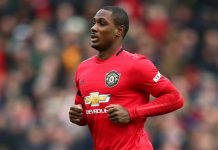 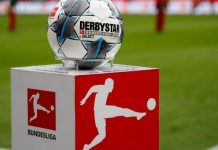