The Catholic Church says it plans to pray against insecurity and other challenges confronting the nation between Oct.7 and Oct, 10.

The Charismatic Renewal of Nigeria (CCRN) from the Catholic Archdiocese of Lagos said this on Friday during a news conference.

The Assistant Chairman of the conference planning comittee, Mr Uche Anyway, disclosed this while addressing journalists.

He said that the aim of the conference was to pray for the nation and learn more about God.

Anyway said that the CCRN planned to gather no fewer than 50,000 people to pray for the state of the nation during its 11th Lagos Archdiocesan conference holding from Oct. 7 to Oct.10.

Anyway said that the conference with the title : “Stand Your Ground” will hold at the International Trade Fair Complex, along the Badagry Expressway, Lagos.

The Assistant Chairman of the conference said, “Because of the socio-political situations in the country, people don’t gather to pray anymore as they used to do in the past.

“This is why we are gathering everyone together to pray for peace to reign in the country.

“The conference is not only for Catholics but for everyone who wants to pray for themselves and pray to make the country great,” he said.

He added that the conference would be an oppurtunity for everyone to come together to raise their voices to God on behalf of their families and the nation.

Anyway said that adequate security would be put in place to ensure free flow of traffic during the conference.

Also, Rev. Msgr Pascal Nwaezeapu, while speaking during the news conference, urged everyone to take the conference serious.

“Many people have lost faith in the country which was not so in the past.

“We are telling Nigerians that no matter what they are passing through, they should not give up and they should keep doing the right thing,” he said.(NAN) 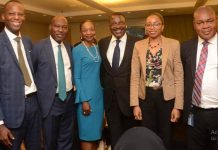