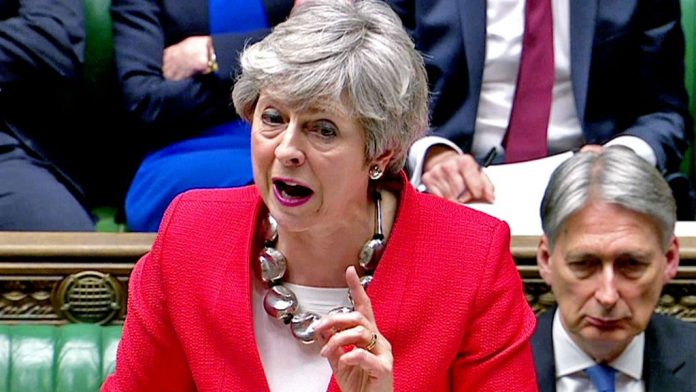 The Prime Minister hoped firing her defense secretary over a leak would put her latest government scandal to rest.

But it seems only to have unleashed yet another political storm for the British prime minister, with members of her own party questioning her judgment and opponents demanding the police be called in.

May, who is clinging to her job despite failing to persuade parliament to accept her plans for Britain’s exit from the EU, fired Williamson on Wednesday.

She blamed him for a leak about Chinese telecoms firm Huawei from a meeting of the cabinet’s National Security Council (NSC) which discusses intelligence and defense strategy.

Williamson has continued to deny responsibility, saying he had been judged by a “kangaroo court”.

May has said she considers the matter closed. Others have refused to let it rest.

“In what world is it acceptable that the prime minister should be the arbiter of whether a politician she believes guilty of criminal conduct in office should face a criminal investigation?” said Tom Watson, Deputy Leader of the opposition Labour Party.

The leak, first reported in the Telegraph newspaper, said Britain would allow Huawei a role in building parts of its 5G network, setting London at odds with Washington, which wants allies to ban the Chinese firm from the next generation of communications technology.

Williamson, previously in charge of party discipline, was an important political ally for May as she struggled to steer Britain through Brexit, its biggest upheaval in decades, without a majority in parliament and no clear consensus about the best way to leave the European Union.

She announced in March she would step down if parliament accepted her Brexit deal, effectively launching a party leadership contest to choose her successor.

The Huawei leak has crystallised doubts about May’s ability to keep her ministers in check and govern effectively.

Meetings of the NSC are attended by senior cabinet ministers, several of whom are top candidates to replace May.

It was widely assumed that the leak was intended to give rivals a chance to portray themselves as stronger than May on security.

May’s own fate and that of her project to extricate Britain from the European Union are now in limbo after parliament rejected the Brexit agreement, forcing May to ask the EU for an extension.

Brexit is now set for October, but what form it will take or whether it will happen at all are in doubt.

The delay means Britain must hold elections for the European parliament later this month at which May’s Conservatives are expected to be trounced. They are also forecast to lose hundreds of seats on local councils in elections on Thursday.

In firing Williamson on Wednesday, May said an investigation had left no other credible explanation for the leak except that Williamson was responsible.

Cabinet office Minister David Lidington, who fielded questions at an urgent parliamentary hearing on the affair on Thursday, said that May had nevertheless not accused Williamson of breaking the law.

It was for police, not ministers, to decide whether a criminal offense had been committed and the government did not intend to refer the matter to prosecutors, he said.

Lawmakers, including Conservatives, called for all the evidence against Williamson to be made public.

“Natural justice demands that the evidence be produced so his reputation can be salvaged or utterly destroyed,” said Desmond Swayne, a Conservative lawmaker.